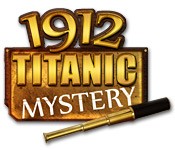 The story of the Titanic is an infamous tale of tragedy, loss, and the unthinkable. In 1912 Titanic Mystery, the birth of the Titanic II 100 years after the sinking of the legendary leviathan brings promise of reconciliation by completing the vessel’s original maiden voyage. However, not all is as it seems when threat of a bomb surfaces. It’s up to you to stop it in this new hidden object game from Suricate Software.

The Titanic II is a vessel based directly off the original, only updated with modern technology. At the beginning of the story you’ll be introduced to six members of the crew. With very little known except that you’re a descendant of one of the original passengers, the story soon unfolds into something much more dramatic when one of the six crew members, identity unknown, informs you there’s a bomb on board. In order to have any chance of preventing the sinking of the Titantic II, you must find and follow the clues left by the mystery bomber and eventually try to find and deactivate the bomb.

1912 Titanic Mystery is a hidden object title with a winning way of storytelling. The levels are similar in nature: you will visit a particular area of the Titanic II, finding 10 specific objects, such as 10 suitcases. You will then need to find 10 randomized objects, finally piecing together a key item, which can be used to access the final puzzle of each area, and then solve it. There are 25 unique puzzles and 25 unique areas in the title, with each being revisited several times. A major part of the game is to collect a series of diary entries, which further delve into the storyline and the circumstances of the bomb being placed on board.

The gameplay itself is nothing profound: you will often be finding the same objects over and over again, and the objects themselves are mindlessly scattered about: a bit strange for a brand new vessel with a very rich reputation of luxury and style. Objects often don’t make sense in their environment, and are resized to disproportionate sizes, leaving the gameplay pretty easy, as well as quite quirky.

The puzzles are an improvement, though. Only half of them are terribly easy, and they boast a healthy variety from matching card games to matchstick puzzles and quantity balancing. While there are no hints available for the puzzles, they can all be skipped after waiting for a short time, usually in under a minute from starting. There is a penalty of 10 minutes, however, for each puzzle skipped. Gameplay can be timed or relaxed, and puzzles can be replayed from the main menu area.

Speaking of hints, the hint system comes in the form of life-savers, which can be collected and used as hints. You can only hold six at a time, but each area has two you can pick up and add to your inventory if you’re a bit low.

Throughout the course of the game, you will be visited by the six crew members from the beginning, who will share fascinating facts about the original Titanic with you. It’s a nice way of learning more about the original cruise liner without being invasive.

The game itself does a masterful job of storytelling, though, with the game growing more intense as you progress through each area. Instead of it being told live, you’ll be reading it as you collect diary entries from a woman on board the original Titanic during the maiden voyage. The story is anything but shallow, and soon grows into a very personal and enthralling account of the simple life, the past, love, and survival. But the entries aren’t just a nice touch of storytelling and involvement: they tie directly into the present and the situation with the bomb.

Overall, 1912 Titanic Mystery is a game with average gameplay, but an interesting story that helps to make the experience a little more interesting.