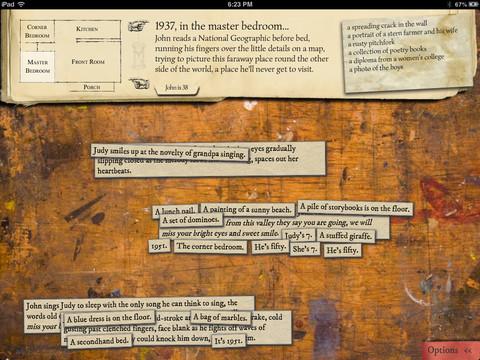 A story for readers, a workbook for writers, and a collaborative sharing space for both.

18 Cadence is the latest work from interactive fiction writer Aaron A. Reed, creator of Blue Lacuna.  While not a game in any standard sense of the word, this “story kit” is an interactive experience that allows you to send more than just a high score to the world: you are enabled and encouraged to share your own story or poem with other reader-creators, and to explore what they have shared as well.  It’s a potentially endless cycle of inspiration and creation, originating from Reed’s own offerings.

The kit is composed of two primary features: the story content and the controllable aspects of that content.  For the uninspired reader who merely wishes to take in the primary tale, Reed has provided a history of the house at 18 Cadence Street, told through vignettes over a period of 100 years.  Beginning in 1900 with the first owners of the house, Thomas and Anna, each of the five rooms within the home is assigned a vignette specific to an event that took place there in that year.  Some events are remarkable or historic, like a birth or death, while others are standard occurrences, like cooking dinner in the kitchen.  Alongside each vignette is a list of objects present in the room, like “an icebox,” “a grandfather clock,” or “a heavy volume of Shakespeare.”

Each vignette is personalized to a specific individual within the house, and many rooms contain multiple events, one for each member of the household.  As the years progress, families and individuals move in and out of 18 Cadence and change the focus of the vignettes and the objects residing there, as does the historical period they live within.  Thomas and Anna deal with a new child and deadly illness through the first seven years, the family residing in the house in the early ’40s faces the challenge of sending their sons to war, and the ’90s bring in a group of burnout co-ed renters.  The march of time is felt through each vignette, but so is a timelessness, as every generation exists within the same rooms, every parlor has the same fireplace.  Although the full scale of emotions and experiences is presented through the years, every set of residents ultimately faces some tragedy that causes them to leave 18 Cadence behind.

These beautifully written and at times haunting snapshots of the lives presented are more than enough for an engrossing and fulfilling story, but it is in the appropriation of these vignettes and the other available text that 18 Cadence truly comes to life.  The fully interactive portion of this story kit comes from the fact that every piece of text within it—from the vignettes to the rooms’ objects to even the years—are able to be pulled into the workspace that makes up the majority of the screen.  Any text dragged to the workspace will appear as an individual phrase on a scrap of paper, reminiscent of magnetic poetry tiles.  Individual object phrases—as long as they are from the same room and year—can be combined into single sentences, while other pieces of text will remain separate.  Each scrap of text, no matter its length, is configurable by tapping on it, which will edit the sentence slightly.  For vignettes, tapping will alternate between the full vignette or just its first sentence.  For objects, tapping alternates between a variety of descriptions, such as “Some flowers,” “Some white flowers brighten the table,” or “Brightening the table are some white flowers.”

All of these snippets can be moved freely around the workspace, placed next to or overlapping each other, tilted slightly or lying flat.  Text from any room, year, and family can be saved on the workspace and used with other eras’ snippets to emphasize the emotion of a specific vignette, or create an original story all your own.  Your creations can then be shared with other readers via “Share Story,” which sends it to the collection of shared stories retrieved at random with the “Browse” option. 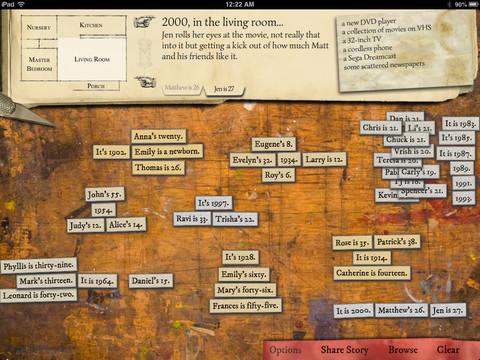 Browsing other creators’ stories after reading through the default text first is inspiring and surprising—they range greatly, from readers retelling vignettes in their “own words” to poems built from individual lines, such as all the instances of residents reading a book from 1900 to 1999.  Many of the user-submitted creations are tinged with the melancholy felt by those living at 18 Cadence, my own included: “they explore a strained marriage, an unwanted child, the deaths of the boys sent to war.”  This variety of creations, shaped by a sense of shared emotion, attests to Reed’s own storytelling ability.

Unfortunately, as with the events within the house itself, not all is perfect in 18 Cadence.  I encountered a handful of technical issues that interrupted the experience: an infinite loop when attempting to share a story’s link; text that would get stuck within a vignette and become unmovable; and a handful of times rooms became completely unresponsive to taps, leaving me trapped within the current room and unable to select another.  All of these issues forced a total restart of the app to resolve them, which would be a minor setback if story creations could be saved in progress.  Unfortunately, the only way to save a story is to share it—send it out to be readable by any other users—so in-progress works are only safe as long as they reside on the current workspace.

This, coupled with the fact that you have a limited amount of workable space (unless you stack phrases on top of one another endlessly), makes working on more than one creation at a time quite challenging.  With the expansive number of vignettes and other text available to utilize, some way to bookmark or save phrases you’d like to use in the future would have been extremely useful.  While reading, I tended to grab any phrase that stuck out to me, even without a specific use for it in mind.  Unfortunately, when it did not end up being used in my current story, it merely had to be cleared away, with only a hope that I could find it again for future creations.

While these issues put up unnecessary roadblocks to one of 18 Cadence‘s primary features, you will still ultimately get out of this story kit what you personally want and put into it.  Readers will find a beautiful series of vignettes that steer them through the lives of dozens of individuals over 100 years, while writers will have plenty of inspiration from both Reed and other creators to develop their own engrossing stories, poems, or alternative forms of fiction.