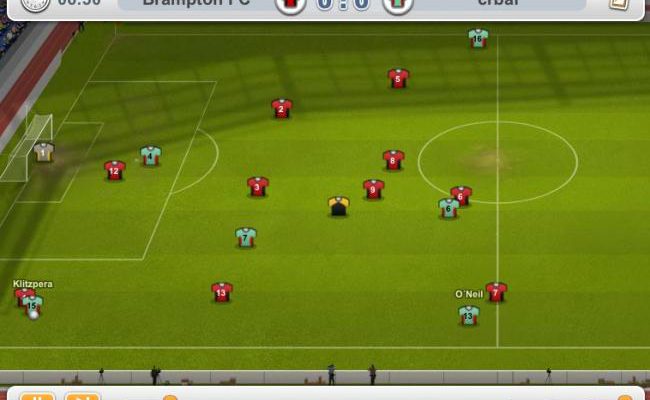 Facebook has emerged as an excellent source of soccer management games thanks to titles like FIFA Superstars and Top Eleven. 11×11 attempts to nudge its way into this crowded space by offering a more approachable and visual take on the genre. For the most part it works, as the game combines a great presentation with management gameplay that’s not particularly complex, to make for an appealing all around package. However, a few niggling issues and the absence of a few key features make this an experience with room to improve.

As with most soccer management games, 11×11 tasks you with building up a professional team from nothing. You’re given a group of players to begin with and how you decide to shape your club from there is up to you. You’ll come up with a team name, design your logo and jersey, formulate strategies, and tweak your line-up by buying and selling players and putting them through training sessions. Your team can compete in a variety of matches, including exhibition games against random players, friendlies against any friends who are playing, and a wide array of tournaments. Once you play a match you’ll have to wait a pre-determined amount of time to play again (or spend premium currency to speed up the process). 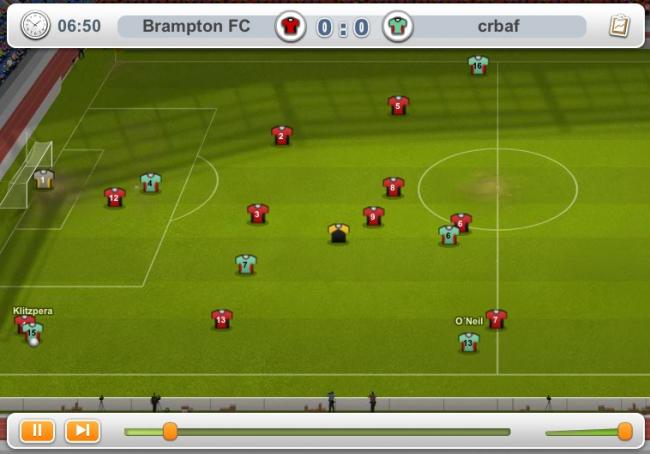 Actually experiencing the games is much more engaging than in similar management titles. You still simply sit back and follow the events of a game as they unfold — as a manager, you don’t have direct control over your players’ actions — but you get to watch the game play out, with tiny jerseys running around the field simulating the game. You get all the same information as if you were simply watching a text play-by-play of the game, but the visual element makes it that much more interesting.

This enhanced focus on the presentation of 11×11 carries on throughout most of the game. Your main screen is a view of all of your important buildings like the club’s stadium and fan club, and you even have an office complete with trophy case just itching to be filled up with silverware. It’s much more attractive than the simple text and menus the genre is known for.

11×11 is also a more accessible soccer management game, removing some of the complexity in favor of simplicity. You don’t have to deal with much of the off the field business elements of running a team, for instance, and player growth is limited to an overall skill rating. For those who may find games like Top Eleven daunting, 11×11 is a more casual experience. 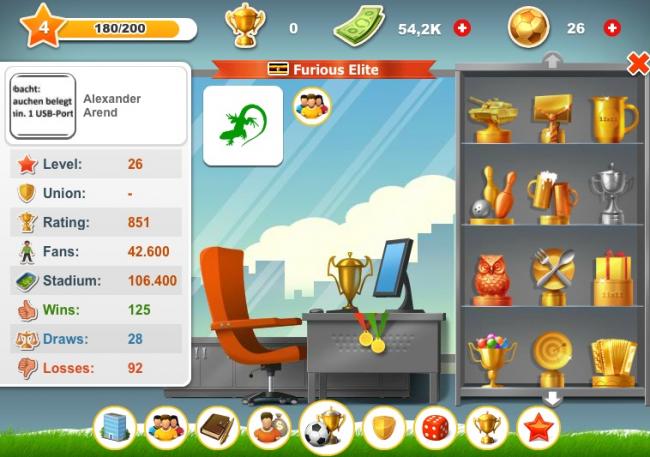 While a number of features are listed as coming soon, suggesting that we can expect some updates in the future, there are still several aspects that are either missing all together or are in need of a fix. Notably, the absence of any sort of a league system seems like a large oversight. While you can participate in a number of tournaments, without a proper league you don’t get the same sense of progression as you attempt to turn your club into a champion. There are also issues with the matchmaking. For instance, during one exhibition game that was supposed to be played against an opponent of comparable skill, we ended up playing against a team seven experience levels higher than us. Obviously, we didn’t win.

In spite of these issues, 11×11 still delivers when it comes to offering an approachable, easy to jump into experience. There are no intimidating menus to conquer and there’s no real pressure to constantly check back and tweak your team. You can simply jump right in and have some fun, making it an excellent introduction to the genre.