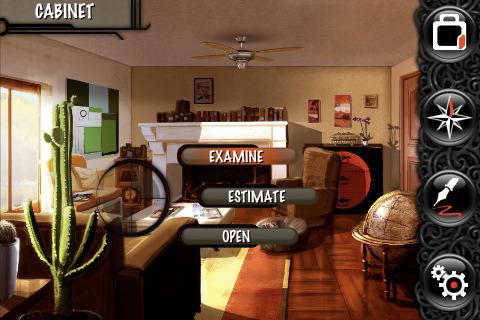 Originally released back in 2008, 1112 Episode 01 was heralded by critics as a stunning achievement in art and gameplay. An adventure game featuring hand-drawn art, it was the first of its kind on the iPhone. Now, 18 months and some 50,000 iPhone games later, Agharta Studio has released its follow-up. Before we explore that, however, we thought it best to take a look back at the game that came before it with a fresh review of 1112 Episode 01.

You’re falling in a dream, seemingly endless, until you land with a large thud. There are people all around you. Someone is shouting at you to wake up. And then you do. So begins the story of Louis Everett, an antiques dealer who is having the same strange dream night after night. His wife thinks it’s from the medicine he takes for his headaches. Louis thinks his wife worries too much. Besides – he needs to get on with his day. He has a meeting with Mr. Goodman that could change the future of his business!

The story and puzzles in 1112 seems to revolve around the mundane life of an ordinary man. Fixing the boiler for his wife, opening the safe for his pills, assembling a proposal for work – it’s the sort of things that any of us might tackle on a daily basis. But then you start to gleam some information that suggests that the world of 1112 and ours may not be the same. Cigarettes have been outlawed by the government. And Louis’ headache meds? Those are from the government too. People are afraid to criticize the ruling powers, because the government always knows what’s for the greater good… don’t they? Strange elements like this build up quickly, and while we won’t give away specifics, they lead to a cliffhanger ending worthy of Twin Peaks.

As far as adventure games go, the puzzles here remain small and relatively simple. That’s not to say solving them wasn’t satisfying, but for the most part they didn’t require a great deal of logic or problem-solving. They did, however, provide a good deal of challenge due to a well-intentioned design flaw, which made nearly every visible item an object you could interact with.

By making nearly everything a clickable object, finding necessary puzzle objects becomes a nearly impossible task. The game suffers from an over-abundance of interactivity. Every item on every desk, every picture on every wall, every individual cupboard, appliance, and piece of fruit – it’s waiting to be explored. While the breadth of content may sound satisfying, it can make the act of solving puzzles incredibly frustrating.

Worse yet, the developers neglect to give you hints in moments where you might be truly stuck. At one point I needed to find a document that I was told might be in the kitchen, the hallway, or the living room. Advice like that really doesn’t narrow things down much, and with nearly everything offering up interactivity it took me a ridiculous amount of time to discover which cupboard they were hiding in. 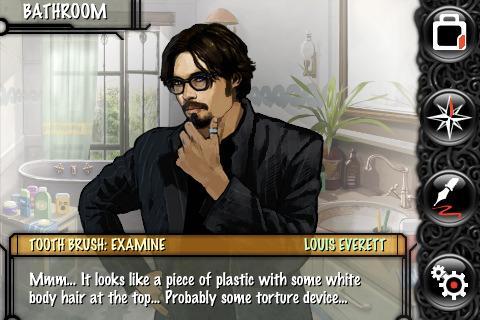 Another complaint some may have with the game is its length. Clocking in at just under an hour, 1112 Episode 01 is an incredibly short experience for the price. And if we hadn’t spent so much of that time feeling lost amongst the ridiculous myriad of touchable objects, we may have wrapped things up even quicker. It should also be noted that the game has some occasional profanity and some PG-13 situations, so this is probably a game you’ll want to keep out of the hands of younger players.

But if there’s one thing 1112 Episode 01 is about, it’s less the gameplay and more the art. Jaw-dropping hand-drawn visuals make up the characters and the scenery. Background objects like ceiling fans move with subtle animations. Character design draws clear inspiration from A Scanner Darkly, and rightfully so. The story offer mixes eerie suspense with a mundane life, not unlike Heavy Rain, and the chosen art style is a perfect complement to that.

The music is a great fit, too. While the game offers up the only a single pop song, it’s a unique, somber, Lilith-Fair-meets-Portishead kind of a tune that compliments the experience perfectly. 1112 also offers up the neat touch of playing the song clearly with lyrics in some areas of the house but quieter and instrumental in others. Different instrumental scores also set the perfect mood for other areas you’ll explore in the game.

1112 Episode 01 is an outstanding piece of interactive artwork, but as a game it has some flaws that can really hamper the experience. With the new episode now available, we’re hoping that the developers took the intervening 18 months to identify and rectify these issues. If not, it’s entirely possible that players in 2010 might not be as forgiving of the 1112‘s flaws as they were in 2008.