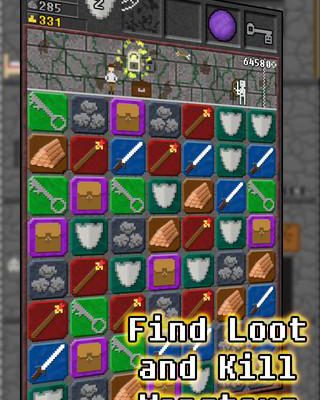 Another great match-3 mashup for fans of role-playing adventure

If someone had thrown the term “match-3 RPG” my way five years ago, I would have replied with a quizzical look and a deep understanding that whoever I was talking to was either confused, a moron, or both.  Before you think me mad, try to remember: five years ago the world didn’t have Puzzle Quest.

Since the release of Infinite Interactive’s mixed-genre masterpiece, a lot of games have attempted to put their own spin on a similar formula.  Dungeon Raid, King Cashing, Witch Wars – all unique experiences inspired by Puzzle Quest‘s special mix of matching and medieval magic.  The latest such game to follow in these footsteps is 10000000 by EightyEight Games – and it’s every bit as enjoyable as and unique as its predecessors.

Play in 10000000 takes place in two parts… sort of.  At the top of the screen is the actual “adventure” part of the game.  Your hero will move endlessly to the right, encountering monster, treasures, and more as they try to venture as deep into a dungeon as they possibly can.  With each obstacle they encounter, though, players will need to make relevant matches on the match-3 game board below to progress.  Fighting a monster?  Match wands and swords to slay your foe.  Need to open a chest or a door?  You’d better get matching some keys.

You’ll only have a second between obstacles, so it can be hard to find time for clearing out the non-essentials.  More often than not you’ll find yourself doing so in mid-combat in the hopes of having it line up a more aggressive next move.  And since your “health” is really your time in 10000000, the more time you waste, the quicker your dungeon run is going to end.  It’s the speedy frenzy of trying to bust out the right matches that makes up a good portion of 10000000‘s appeal. 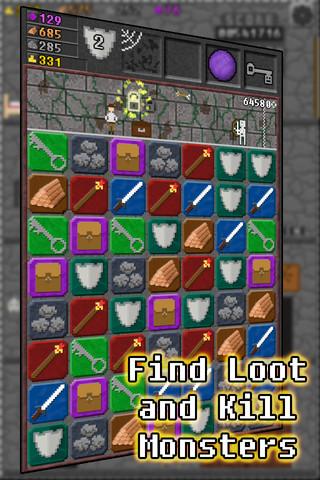 The other portion is more rooted in the RPG elements of the game.  Between runs you’ll be returned to your castle.  It’s here that you can spend the experience, gold, wood and stone earned on unlocking new rooms and purchasing new upgrades.  Each room has a different type of upgrade available (perks, weapons, shields, etc), and the rooms can be upgraded too, which opens up even more options.  For the endless level-upper in all of us, 10000000 has a lot to love.

The only real complaint to be had is that matches on the game board can’t be queued in advance of use.  In other words, if I’ve just unlocked a door and see a monster on the horizon, I can’t match 3 swords while I’m walking towards the monster – I have to wait until I’m engaged before I can match for my attack.  It sounds like a petty complaint (and hey – it probably is), but in a game where time is of the essence, giving players a slight edge like this would be a real boon.