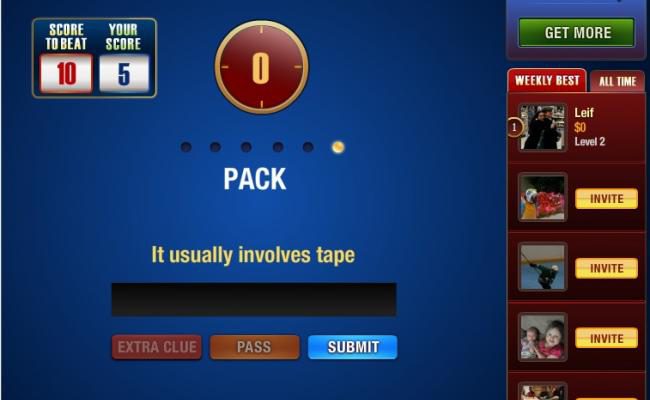 If you’ve ever wondered where old game shows go when they die, iWin is making sure that Facebook might be a good place to start looking for them. After all, we’ve already seen the release of immortal favorites as Family Feud and The Price is Right with much success, and now iWin hopes to breathe new life into a forgotten favorite called the $100,000 Pyramid. If only the approach was different. Facebook seems like a good fit for the 70s hit, but iWin’s excessive gameplay limitations mean that you’ll feel like you’re back in the disco days waiting for the next day’s episode.

It’s a shame, because $100,000 Pyramid is a joy to play. Each round begins after you click on one of the pyramids’ three categories, after which you’re given a series of clues that help you identify the right words associated with that category. If you get at all six words correct, you’ll earn a stash of bonus cash and a set of points. If you do well enough in all three categories, you’ll then advance to a timed Winner’s Circle where you’ll use the clues to guess what the words have in common. And if you manage to pull that off perfectly, you’ll get to lord over your friends with your weekly winnings. Socially, the game is limited to leaderboards, but you can win $100,000 in in-game currency if a friend of yours plays a game you send them and gets every answer right. 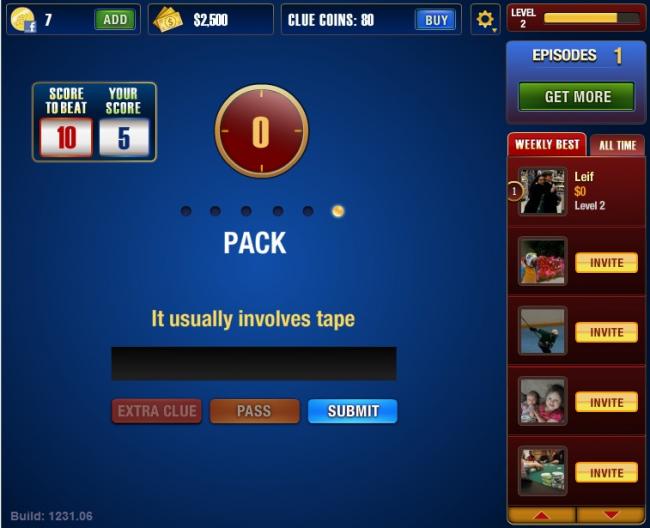 The $100,000 Pyramid shines because it demands some thought, unlike games such as Deal or No Deal that rely more on chance. That doesn’t mean that the game requires Herculean feats of intellect, but it does mean that some clues will stump you even if you buy the optional hint. The hints themselves usually work fine, but you’ll sometimes wish that you had Dick Clark on hand to decide whether or not your answer is close enough to count. At its worst, it’s hard to make sense of the clues.

Consider one of my own rounds. While playing the Winner’s Circle, my clues were “two” and “smile.” Even after purchasing an additional clue, I couldn’t figure out for the life of me that the answer was “dimples.” Elsewhere, I was forced to play a category that demanded answers that only a resident of San Francisco would know. On the plus side, you need not be Mavis Beacon to win thanks to the game’s intelligent system for recognizing words. Even after typing correct answers with outlandish typos(“internissssssion” for “intermission,” for example), the game never failed to give me credit. 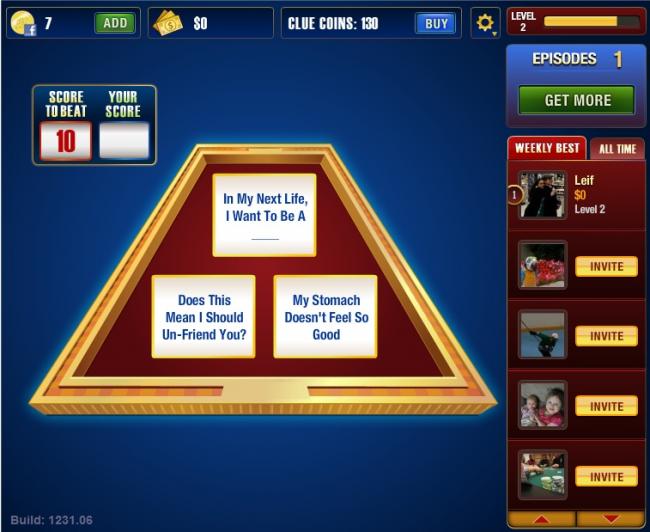 But that’s only when it works. That $100,000 you can win if your friends get every answer right? You often won’t be able to collect it thanks to an error screen that shuts down your game every time you open up a message. Those helpful hints? They’ll sometimes repeat the clues you’ve already been given, most notably in a category dealing with prime numbers.

You can’t even directly purchase a new game with the cash you’ve accumulated. As it stands, the only way you can play a game beyond 12-hour freebie is by amassing collections of five knickknacks that you buy with you winnings. Considering the already strict limitations on gameplay, these can take days to complete. If you don’t feel like waiting to complete a collection, you’re expected to pay a minimum of 10 Facebook credits if you wish to play more than one game every 12 hours or so.

The $100,000 Pyramid is a fine game waiting to happen, but in between the errors messages and the once-a-day gameplay, you’re probably better off with a less stingy title.