Home / Reviews / 10 Days to Save the World Review

10 Days to Save the World Review 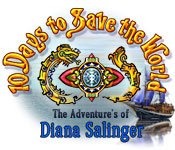 In 10 Days under the Sea, Diana and her sister found an amulet. The sequel, 10 Days to Save the World, picks up two years after these events, when people begin to suspect that the amulet could be causing the cataclysms like flooding in Africa and a drought in Venice. Diana must work with her father, an archaeologist, to figure out how to save the world. Although, the story gets lost and barely registers a sense of urgency, the diversity of puzzles in the hidden object adventure game keeps you engrossed.

10 Days to Save the World shares a few things in common with its predecessor, such as Diana, the amulet, the hidden object game aspect and the hand-drawn graphics. The hint system is different in the second game, however. Hints are available on a refill basis. Once you use a hint, the ring must fill back up before it’ll work again and it takes a long time to reload. This becomes frustrating when playing scenes that don’t drop a hint of what to do.

While you look for objects, you don’t always have a list to tell you what to find, which provides a nice change of pace from the standard seek and find game. Sometimes you need to figure it out on your by looking at the tasks at hand or explore the scenery until you come across something. Once you do, names of needed objects will appear. Like today’s typical hidden object adventure games, you’ll use some of the objects on the scenes to complete tasks such as opening things, unlocking things, putting things back together, or blowing things apart.

Puzzles range from matching pairs and putting jigsaw pieces together to moving parts to the right place or position and making a brew to wake up a stone. While you’ve seen some puzzles in other games, this one introduces a nice amount of original ones to compel you to keep playing.

10 Days to Save the World takes Diana to different locations, but the story doesn’t explain why you end up in these places. One minute she’s in Mexico discovering something about Atlantis and then the next minute she’s heading to Texas. At least the scenery somewhat reflects the locations even though Texas looks more like the Wild West than it does present day Texas.

Part of the problem with the story is due to the awkward grammar, use of uncommon words and distracting typos like the spelling of "Henry" as "Genry." Even the subtitle has an unnecessary apostrophe that appears in "Adventure’s of Diana Salinger" throughout the game.

For most of the game, the story will make you wince with phrases like "It seems like the laptop is discharged," "Rite herb" and "Take my congratulations." No wonder why it’s hard to follow, absorb and remember the story. You can review the story and watch the movies again anytime, but the narrative is just as clumsy as the dialogue. The story feels scattered and never comes together.

Despite the problems with grammar and unlike the previous game, very few names throw you for a loop. The game asks you to find a bonnet, but it’s not the thing a woman wears on her head. Instead, it’s another term for the hood of a car. Another time it references an aqualung, something most people call an oxygen tank.

If Diana is supposed to save the world from an apocalypse, then the story could stand a much stronger ending than its anticlimactic one that resembled the end of an ordinary TV show episode instead of a dramatic one in a movie. What’s scarier is that the game threatens to lose your progress when you try to exit. It does save the game, but you can’t be sure where it will take you when you return.

10 Days to Save the World engages with its interactive puzzles and its "in the middle" level of difficulty. It won’t be a memorable game, but it’ll provide a decent challenge on a rainy day or dull afternoon.