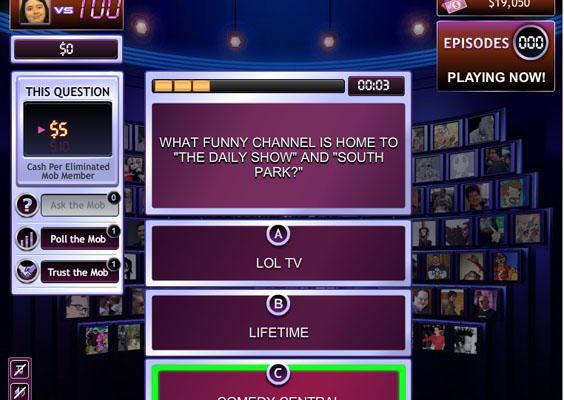 iWin has expanded its line of game show adaptations for Facebook with 1 vs 100, based on the American incarnation of Endemol’s internationally successful series. The basic idea of 1 vs 100 is that a person tries to answer more trivia questions correctly than the Mob, a gathering of 100 people. Each question the contestant answers correctly ups the stakes, letting him or her earn a sum of money that increases for every member of the Mob eliminated. Successive questions grow more valuable, eventually letting the contestant risk everything for thousands of dollars in the game’s final rounds.

If this sounds like a tricky concept to import into Facebook, you’d be correct. The way iWin’s version works is to make the Mob a computer-controlled assembly of 100 portraits from your friends list. Who answers questions correctly and incorrectly seems to be based on basic probability and follows a fairly predictable pattern. You’ll eliminate few Mob members with the early, easy questions and will whittle their numbers to around 40 by the time you begin the game’s all-or-nothing final phases. The goal of the game is to eliminate every member of the Mob, but once you get to the elimination rounds just leaving with the money you’ve earned is an option. 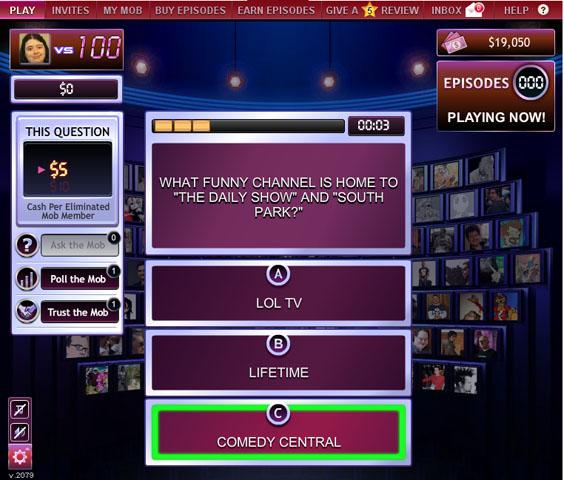 Like most of iWin’s other game show titles, you can spend a little real money to acquire power-ups that help you out as you play. In 1 vs 100, the power-ups are based on the game show’s three types of assists. There’s “Ask the Mob,” which effectively just eliminates an incorrect option from one of the three possible answers to any of the trivia questions asked of you; “Poll the Mob,” which lets you know how much of the Mob has selected each answer; and “Trust the Mob,” which locks your answer into whatever most of the Mob has selected.

The main weakness of iWin’s 1 vs 100 is inherent in the nature of the original show. A lot of the tension in 1 vs 100 is meant to come from the unpredictable nature of the Mob and the contestant’s attempts to outlast it. Since the Mob in iWin’s 1 vs 100 is automated, its behavior is extremely predictable. A fairly predictable amount Mob members are always going to be eliminated after each question. There’s no feeling of really playing the game with your friends, because there’s no real connection between their behavior in the Mob and their actual personalities. 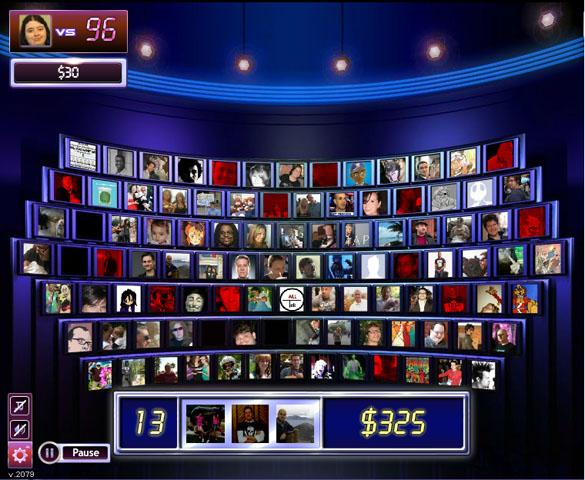 Overall, though, 1 vs 100 works in the same way most of iWin’s game show adaptations, such as Family Feud and Deal or No Deal. Your game sessions are long and immersive, thanks to authentic music stings and sound effects. The social mechanics are asynchronous and mostly let your friends cooperate with you to earn bonus money. You can play a few times a day for free and after that need to pay for more chances. The trivia questions are all solid, with a broad enough variety that you’re unlikely to encounter repeats. 1 vs 100 actually has a lot to offer fans of trivia games in addition to fans of the actual TV show.