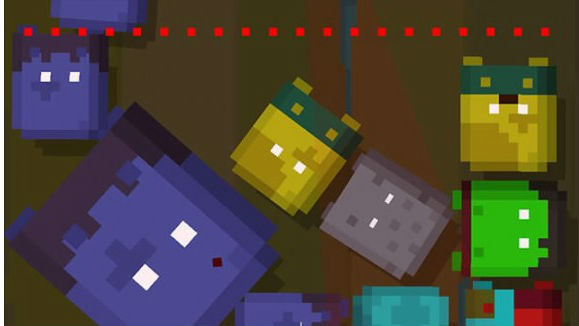 And to even think about the smell…

Uh, anyway, Zombiebucket is a match-three game, though that’s a bit of a misnomer. Technically, if you match up at least two same-colored zombies by dragging your finger in any direction, they’ll disappear. But if you restrict yourself to piddly two-zombie matches, you’ll become overwhelmed and join the ranks of the damned undead in no time.

That’s because Zombiebucket moves at a blistering pace. As soon as you clear a line of zombies, more tumble in to take their place. What’s more, the longer you play, the faster the action gets. At some point you’ll trip up and die — but what else can you expect from a zombie apocalypse?

There are power-ups to help  you thin out the herd, like bombs and zappers and hybrids that let you bridge matches containing different colors. Everything is chaotic and frantic, but not in an overly-stressful way. Your job is to survive and beat your high score.

Zombiebucket doesn’t demand much else out of you, but it’s still enough to keep you going at the game like a zombie snacking on grey matter. You can grab it for free on the App Store.