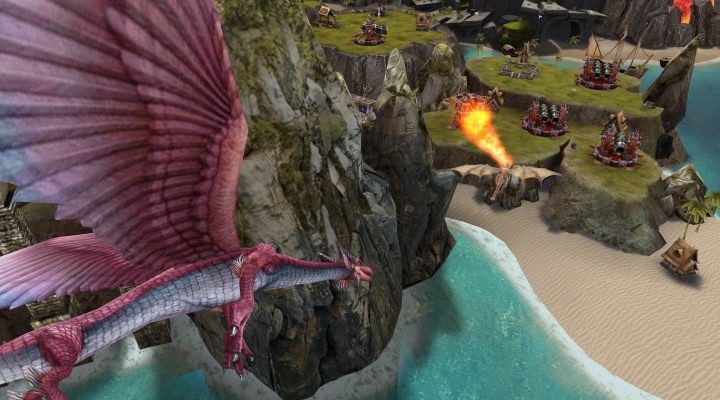 War Dragons is a base-building and dragon-rearing strategy simulation that launched back in early 2015. Players spend time constructing their island stronghold and populating it with powerful dragons, cannons, archers, and a variety of defenses to protect against incoming attacks from other players. Of course, the dragons you raise that patrol your home can also be used to launch offensives on enemies as well, allowing you to raid other islands and loot their caches.

The primary raids in War Dragons consist of selecting the fight button and watching your dragons automatically fly to the battle destination. While you control the dragon once it arrives at the opponent’s island, the travel itself is automated and simply hidden behind a loading screen.

This week’s update, the Atlas expansion, addresses this lack of an actually traversable land by introducing a world map that players in a team can explore and conquer alongside their teammates. Instead of merely existing on isolated islands with no real relatable distance between them, Atlas provides a persistent world that you can move across, making your way from the starting outskirts of the countryside to the more lucrative central regions, attacking land holders and claiming territory along the way. It’s lightly reminiscent of the type of massive, shared map found in games like Game of War or Final Fantasy XV: A New Empire.

Developer Pocket Gems has noted that players can find alternative ways to travel past potential occupant rivals: “You can attack them head on, try to circumvent their territory, bribe them with treasure, form alliances against them, or use subterfuge to lure them into a trap. These are all things we’ve already seen players do in the Atlas Beta and we can’t wait to see what happens when it really takes off.” Different teams can form alliances and share resources if they choose, although those alliances are only as strong as the trust they’re built on.

This week’s free update to War Dragons makes Atlas available to players worldwide, although on a rolling schedule: if your team doesn’t have access to the map yet, it should in the coming weeks.