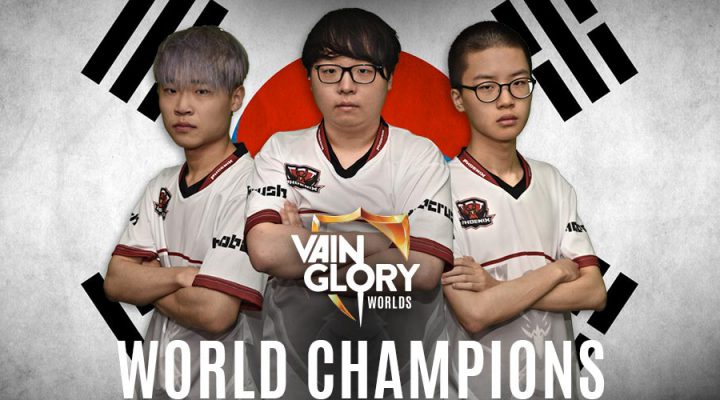 Not too many of us will ever get to experience what it’s like to be named the best in the world at anything, much less a super competitive game like Vainglory. The members of Korea’s Phoenix Armada do, though, as they just became the first ever official Vainglory world champions this weekend in Hollywood.

Super Evil Megacorp and Twitch held the Vainglory World Championships at the historic TCL Chinese Theatre, the first time that venue has hosted a big time esports competition. The three-day event saw 12 teams from North America, Europe, Asia and South America do battle to earn the title of best in the world and the lion’s share of a $120,000 prize pool.

When the smoke cleared, Phoenix Armada was able to defeat North America’s Team SoloMid (or TSM, an esports organization already known for fielding top notch League of Legends and Counter-Strike teams) 4-2 in the best-of-seven Grand Finals. It’s the culmination of the first full year of fully sanctioned professional Vainglory play, as the previous competitive structure for the MOBA was a combination of events run by Super Evil Megacorp and those organized within the game’s community.

All of this begs an obvious question: With esports in general continuing to grow, are mobile esports about to explode in a similar fashion? The people behind the games, including the folks at Super Evil Megacorp, are usually hesitant to make any concrete predictions, but events like this one are evidence that if they haven’t had their proper time in the sun yet, it might not be all that far off.

For highlights of the 2016 Vainglory World Championships, including all the action from the Grand Finals, check out the game’s YouTube channel or Twitch feed. And congrats to Phoenix Armada for making history, because while other world champions will come and go, only one team has the honor of being first.