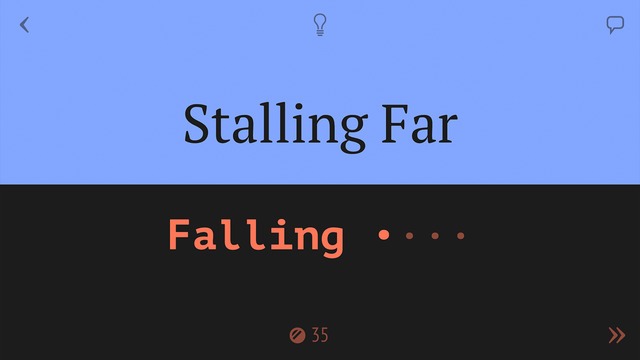 Have you ever seen the majestic Bowler Pare? It’s the largest carnivorous land animal on Earth. It feeds primarily on seals, and its habitat is threatened due to climate change–

Oh, wait. Strike the words “Bowler Pare.” Re-arrange its letters until you get “Polar Bear.” Thank you.

Kieffer Bros’ Jollygrams is a word game that involves making order out of nonsense. Each puzzle offers up a word (or a couple of words) that sound almost sensible, but are actually agents of grammatical chaos. Your job is to unscramble the word(s).

What makes Jollygrams curious — and curiously compelling — is that you’re not simply presented with a mish-mash of letters, a la Jumble (or Junior Jumble, for all you Undertale / Papyrus fans out there). Rather, the words you’re fed seem like they almost make sense. It may come as a surprise, but organizing an “almost” word into a legitimate word is harder than simply re-arranging random letters.

If you get stuck (psst — you will), Jollygrams shows mercy via a hint system. Tapping on the lightbulb above the nonsense word(s) lets you know if the proper word ought to be a person, a place, an animal, etc.

Jollygrams is simple to grasp, but actually playing it will give your headspace a real workout. That’s high praise for word games. You can grab it for $1.99 on the App Store.

Star Wars: Galaxy of Heroes Is out Now (and We’re Already Hooked)

Goat Rider: Have Goat, Will Trample