Home / Play / This is My Life Now: Chatting with Pretty Boys in Mystic Messenger

This is My Life Now: Chatting with Pretty Boys in Mystic Messenger 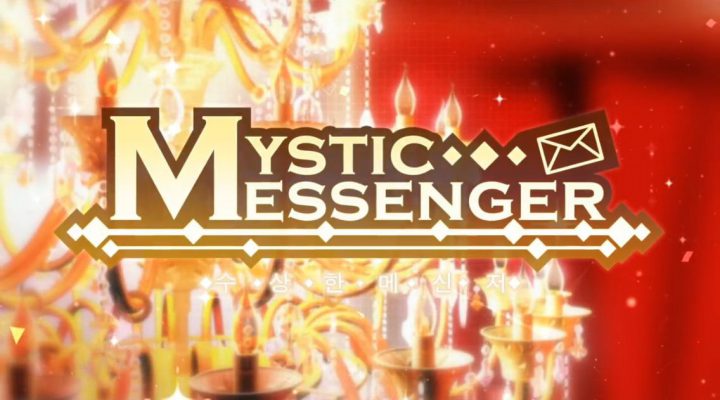 When a game mysteriously floats to the top of the App Store charts without any buzz or much press coverage, we begin to get curious. What is this? Why are people playing it? Is it worth quitting our jobs and living in a van devoted to its honor? Such were our questions about Mystic Messenger, a story-driven relationship simulator that falls into the genre commonly known as “otome” that’s currently sitting in the top 100 grossing games. Otome games are typically anime-styled visual novels that allow the player to interact with and date different characters, usually attractive men but occasionally pigeons. 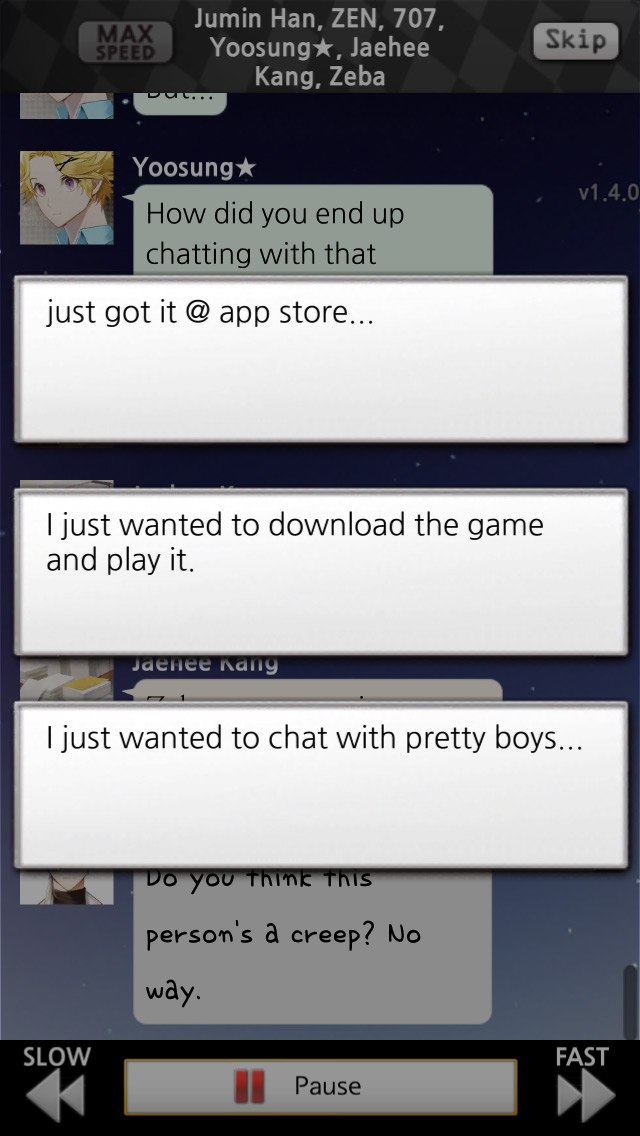 I will admit that despite a curiosity about candlelit dinners with pugs, I’ve never played a proper otome game. The closest I’ve come is wooing bachelors in Harvest Moon and writing Gundam Wing fanfiction. I assume the same is true for many of Mystic Messenger’s fans, based on its lone representation of the genre on the App Store’s top-grossing chart. So what has drawn myself and other first-time otomers into Mystic Messenger?

The main appeal for me has been how well the game integrates its gameplay with what mobile devices are already mainly used for: messaging, chatting, emailing, sharing pictures, and of course, actually calling. The story begins when you receive a random message within a newly installed chat app. The messenger, name unknown, is trying to find the owner of a lost phone; he begs you to go to an apartment he discovered on the phone’s address book and see if it belongs to the owner. You, for some reason, oblige, and end up gaining access to a private chat room run by a group of guys (and one girl) who operate the charitable organization, RFA. They eventually ask you to help them plan their next fundraising party, a task previously owned by the former inhabitant of the apartment, which begins your foray into party planning and getting to know your new online pals. 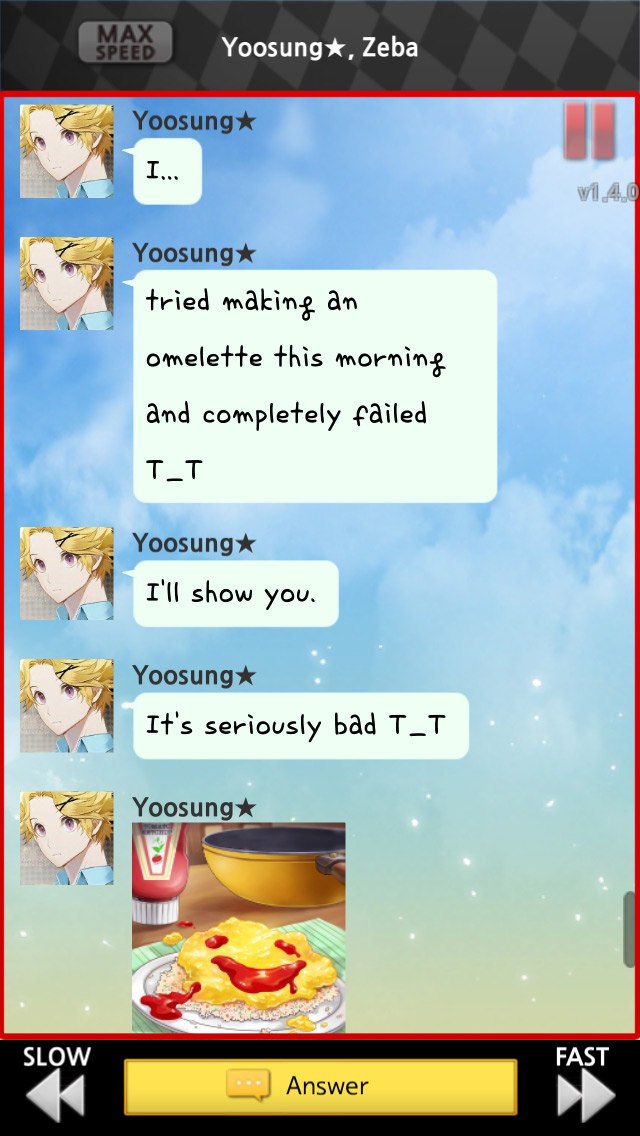 The steps you take to get there are admittedly a bit farfetched, but once set up with your assignment, you’ll begin receiving text messages and chatroom opportunities with the RFA team. Most of the guys are happy to have another woman around, but they each have distinct personalities and even chat styles: college kid Yoosung uses lots of emoticons and “lol”s while business owner Jumin speaks in complete sentences with proper grammar. Some conversations are between multiple characters and provide insight into their relationships: one chat between Jumin and Jaehee was just about her annoyance that Jumin left his cat at her house overnight. At other times, you’ll receive a “phone call” (in Japanese, with your responses still being via text selection) when a character wants to talk to you solo.

Because the game takes place in real time within your own time zone, you’ll also learn the guys’ schedules and habits. Yoosung is in class during the morning but might send you a message around noon at lunch. Zen and Jaehee are night owls who will often be around after 11PM. There’s an engaging familiarity to receiving “Did you eat lunch yet?” when you’re actually sitting there with stomach growling, or receiving a good night text just before you head to bed. It’s a bit reminiscent of time spent in Animal Crossing, except these characters are also flirting with you. 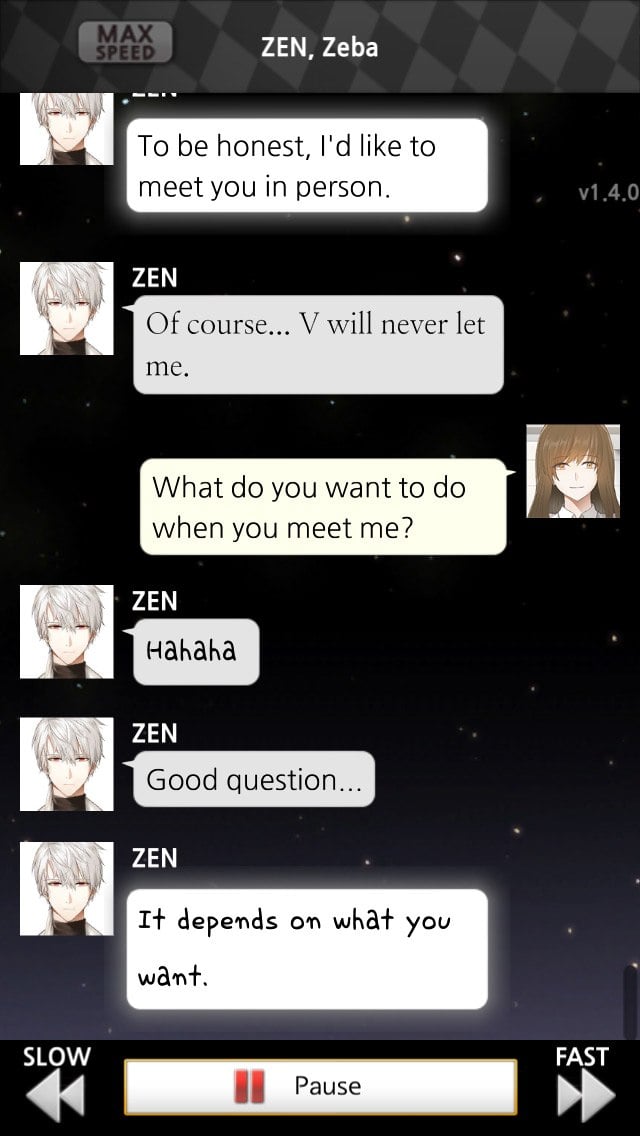 It’s up to you and your dialogue choices whether you flirt back, but that is an assumed part of the game. At some point you’ll be automatically paired up with the character you have the highest affection with, finishing out the story on their “path.” That story ends after 11 real life days of getting to know these characters, their history, and relationships with one another while also working toward building out a guest list for the party itself. The party plot provides a shared goal and progression besides just random messages, but the game is still designed primarily for players who want to chat with cute anime guys that will text them pictures of their cats.

I am, apparently, one of those players.