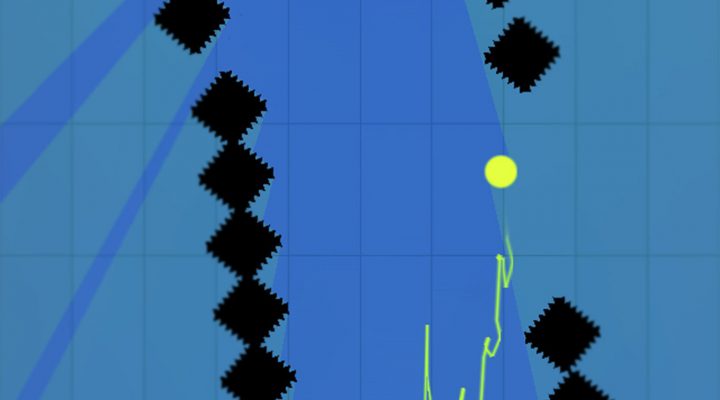 The options for endless high score chase games are, well, endless. But today’s surprise entry for best twitchy addiction is Skill Wave, which will have you tapping away to reach new heights in a dynamically perilous abstract world. Though it’s been out since last year, Skill Wave recently got an update, which has pushed it into the top searched games on the App Store and brought the game onto our radar.

Guide a bouncing, gliding little ball through surprisingly appealing levels, including flocks of geometric birds, ominous confetti clouds, moving cubes in unpredictable patterns, spiky walls that may or may not advance upon you, and other surprises. The natural gravity of the ball is to drift to the left, so tap to keep moving and stay as close to center as possible. Unlock more shapes along the way and you’ll be facing new traps and hurdles.

As you advance, be sure to pick up the colored power-up spheres scattered throughout the environment. They are satisfyingly effective and will allow you to crash through obstacles to break them, shoot and clear obstacles directly in front of you and much more.

As expected with these types of games, reaction time is crucial and you’ll have lots of cheap deaths; but the chill trance music with lots of head-bopping variation will keep you grooving as you try, try again. I found Skill Wave far less frustrating than similar games in the genre because of the well-balanced combination of powerups, fair difficulty ramping, instant respawn time, and sweet soundtrack.

Vertical orientation and one-touch gameplay means Skill Wave is great for commuters or anyone else looking for a quick fix to pass the time. Skill Wave is free to play on iOS and Android.

Turbo Trot is a Cute and Frustrating Equestrian Nightmare