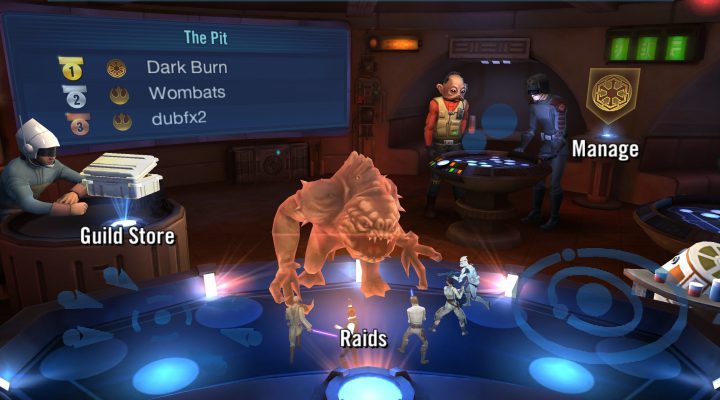 Star Wars: Galaxy of Heroes has delivered ongoing turn-based fun in a galaxy far, far away since its release last fall. EA has given the game a couple of tweaks and updates along the way, but nothing that made players have more of a reason to play it together.

Until now, that is. The latest update to Star Wars: Galaxy of Heroes adds guilds to the mix, providing some extra motivation to play daily and work with other players toward common goals. Unlocked at level 22, guilds can be created by any player (after spending 300,000 credits) and can be set to invite-only or be open to the public.

Along with a unique name and symbol, each guild provides a private chat channel for its members. Mostly, though, Guilds offer new daily activities to which every member can contribute for a share of extra rewards. Guilds also open up raids, described as “epic battles” against “some of the most imposing opponents throughout the galaxy.” The first raid is called The Pit, and it features a chance for guilds to battle the Rancor across seven different difficulty levels.

The Pit raid features a brand new character: Han Solo, who surprisingly has not been in the game to date in his standard from. This Han is an Attacker who definitely shoots first since he gets a free attack at the beginning of every battle. Eat that, Greedo.

Two more characters, the Gamorrean Guard and Jawa Engineeer, are also coming to the Guild Store soon, just in case you were on the fence about joining a guild. There’s really no downside, unless you simply are so antisocial you don’t want to team with other players. But just remember, even the Sith have mentors and apprentices!

Star Wars: Galaxy of Heroes is a free download available from the App Store or Google Play.