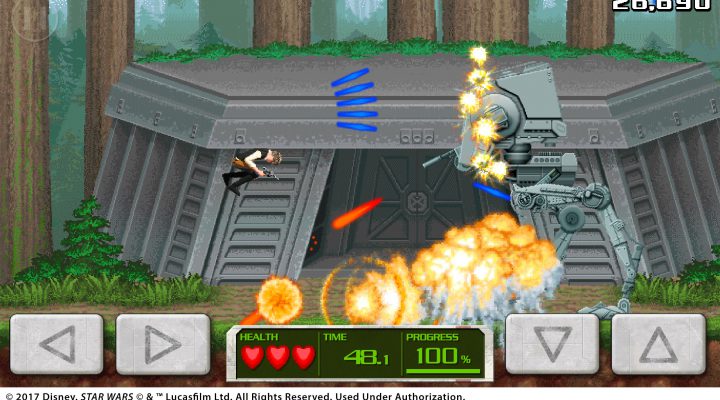 Star Wars: Force Collection isn’t the newest Star Wars mobile game out there, and thus may not have been on your radar for a while. But that might need to change immediately because Konami has cooked up a special mini-game featuring a beloved character and a classic video game just in time for Star Wars Day on May 4.

Anyway, the character in question is Han Solo, a man who needs no introduction. And the iconic game is Contra, which all of you should also already know. As you can see in the trailer below, the Operation: Going Solo mini-game is Contra-style goodness with everyone’s favorite scoundrel in the spotlight. And it looks awesome.

The mini-game has four stages and can yield special rewards for use in the regular game, including 5-star light and dark side cards perfect for use in the “Elite Operatives” event that is also going on right now. Konami also says that additional 5-star cards are on the way over the next few weeks, like Finn, Captain Phasma, Lor San Tekka and flametrooper.

This isn’t the first time that Force Collection has crossed paths with Contra. There was a similar mini-game in 2015 starring Han’s favorite walking carpet, Chewbacca.

Star Wars: Force Collection is a card battle game that covers the whole range of Star Wars movies with characters, vehicles and more. It’s a free download from either the App Store or Google Play, and this might be the best possible time to give it a shot if you’ve got any fondness for Contra and Han Solo. Which you probably do.

Finger Band’s Latest Update is Music to Our Ears