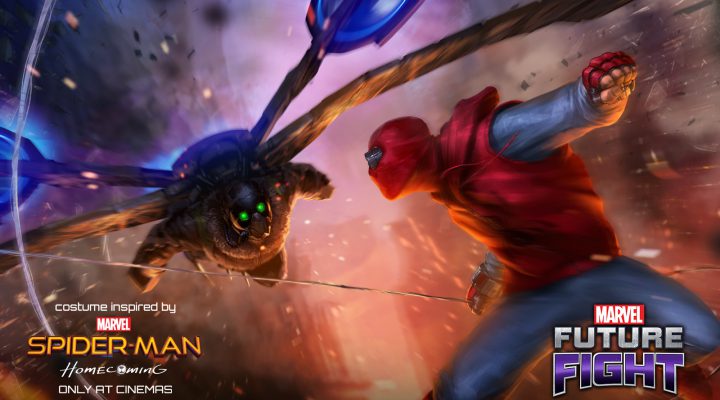 Thwip! That’s a sound moviegoers will be hearing in spades starting on July 7 as Spider-Man: Homecoming arrives in theaters with Tom Holland (hopefully) revitalizing the wall-crawler’s movie franchise. It would be silly to think that Marvel’s mobile games wouldn’t be gearing up for Spidey’s arrival, and Marvel Future Fight certainly seems well-prepared.

The game’s latest update features two new uniforms, one each for Spider-Man and the Vulture, both inspired by what Holland and Michael Keaton are wearing in the film. Alas, the Spider-Man suit is not the high-tech wonder devised by Tony Stark but rather the “Homemade” costume put together by young Peter Parker himself. Hey, every hero needs to start somewhere.

“With the Spider-Man: Homecoming film coming up, we thought it was fitting to introduce new uniforms inspired by the film to bring more excitement and fun into the game,” Seungwon Lee, Chief Global officer at Netmarble Games, said in a press release.

Greeting Spider-Man in Marvel Future Fight will be six new villains, ones you might say have a sinister bent. All of them are iconic Spidey foes, meaning you definitely know who these guys are:

Okay, so maybe you need to be a comic book fan to know who Kraven is. Still, this is more Spider-Man action than you can shoot a web at, and all right in time for the premiere.

That’s taking place on July 5 in some markets and the evening before July 7 in North America. Enjoy Spider-Man: Homecoming if you’re seeing it on opening night, and be sure to keep feeling the Spider-vibe in Marvel Future Fight right now.