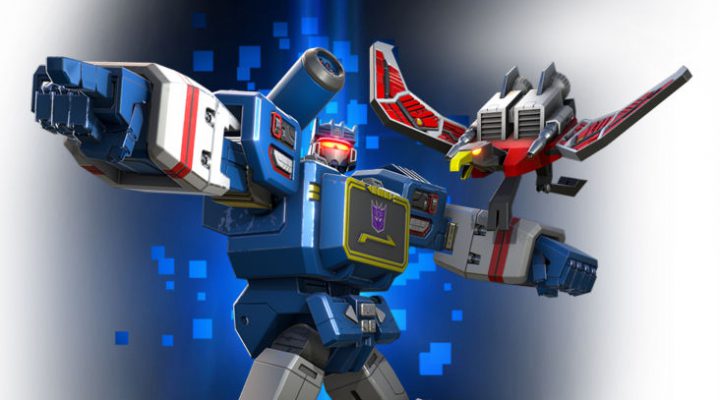 One of the cool yet tantalizing parts of Transformers: Forged to Fight is the way the developers included several well-known bots in the story but didn’t make them available as playable characters right away. Have to leave them wanting more, for sure, but we wanted to play as Soundwave right from the start.

Happily, now we all can. This week’s update to Transformers: Forged to Fight makes Soundwave playable for the first time, much to the rejoicing of G1 fans (a.k.a. all of us old Transformers heads). Naturally, he’s cool on his own, but the devs at Kabam really went all out with his specials, as his Special 2 sees him unleash Ravage and his devastating Special 3 features both Ravage and Lazerbeak. Because what good is transforming into a cassette player if you can’t fire off some cassettes?

Soundwave’s Bot Intel Report contains plenty of additional useful information on using him in Forged to Fight, including favorable match-ups for him (like Ironhide and Grindor) and one to avoid (that would be Windblade). Now if only there was some way to get him on our roster of Transformers right now …

Oh wait, there is! The appropriately named Cassette Crystal is in the Crystal shop right now, and for 150 Energon each, you’ll get one crack at Soundwave, including his powerful 3-star and 4-star forms. You can also head to the arena this weekend and take part in either the Analogue Armament arena to go for a 3-star Soundwave, or try the Mixtape Mania arena and shoot for a top rank that gets you a 4-star Soundwave. Have to love those names too.

And don’t fret. Now that Soundwave is part of Transformers: Forged to Fight, there will undoubtedly be more chances to earn him down the road. It’s just that we’ve waited long enough, so getting him right away would definitely be music to our ears. Or something sound-related, for sure.