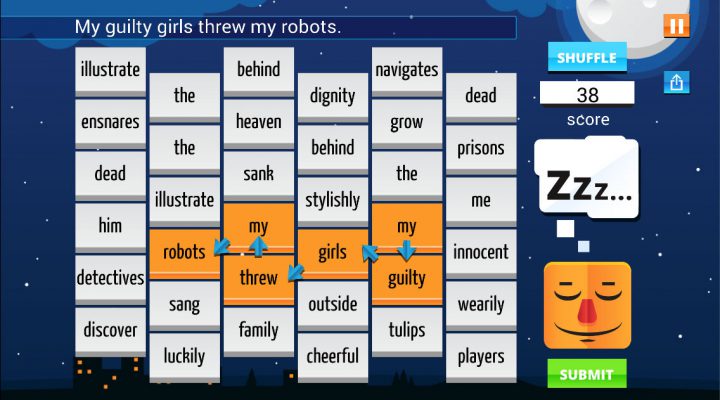 The App Store and Google Play have some wonderful word games, but there two issues with these games at large:

First: Most of them are based around making words out of loose letters. Not nearly enough of them let you make entire sentences out of random words.

Second: The games that do let you make sentences usually won’t let you submit gems like “The lizard detectives stylishly sank heaven.”

Sleep Furiously from Playmation Studios fills both these vacuums by letting you create your own sentences out of a large grid of random words. The weirder the sentence, the better. However, your prose must make sense from a grammatical standpoint. Nouns, verbs, and conjunctions must all be in their proper places. Once you understand that much, you’re allowed to go wild. Run free, “mighty horse ripping festival attendee.”

Sleep Furiously has several game modes, too. Moves mode challenges you to score as many points as possible within a certain number of moves (the longer your sentence, the more points you earn). Timed mode is also about making a high score, albeit within a time limit. And Endless mode is what it sounds like — you can dream forever as you make up all the wordy nonsense your heart desires.

Sleep Furiously ($2.99 on the App Store / Google Play) is quite a smile-inducing experience for fans of word games. It’d be nice if there was some kind of multiplayer feature, but maybe that’ll come to us in a future dream.