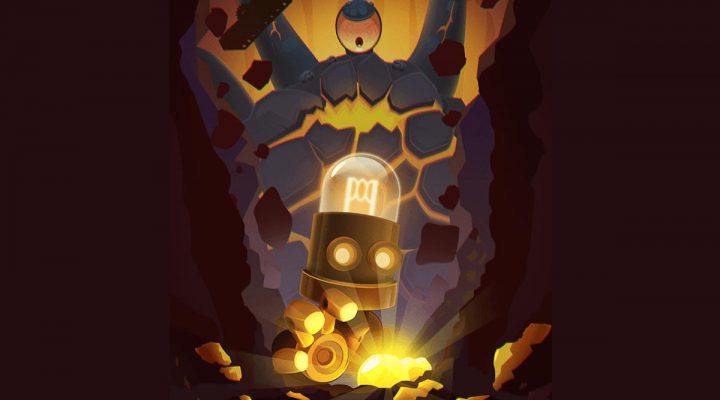 Created by the aptly-named Rockbite Games and launched on the App Store last week, Deep Town puts players in the role of a robotic mining manager in charge of excavating an undeveloped planet. With only a mining laser and some breakable drill bots at your disposal, you’ll begin digging your way toward the planet’s core in search of resources and valuables that will allow you to build a thriving, self-sustained colony on the surface. 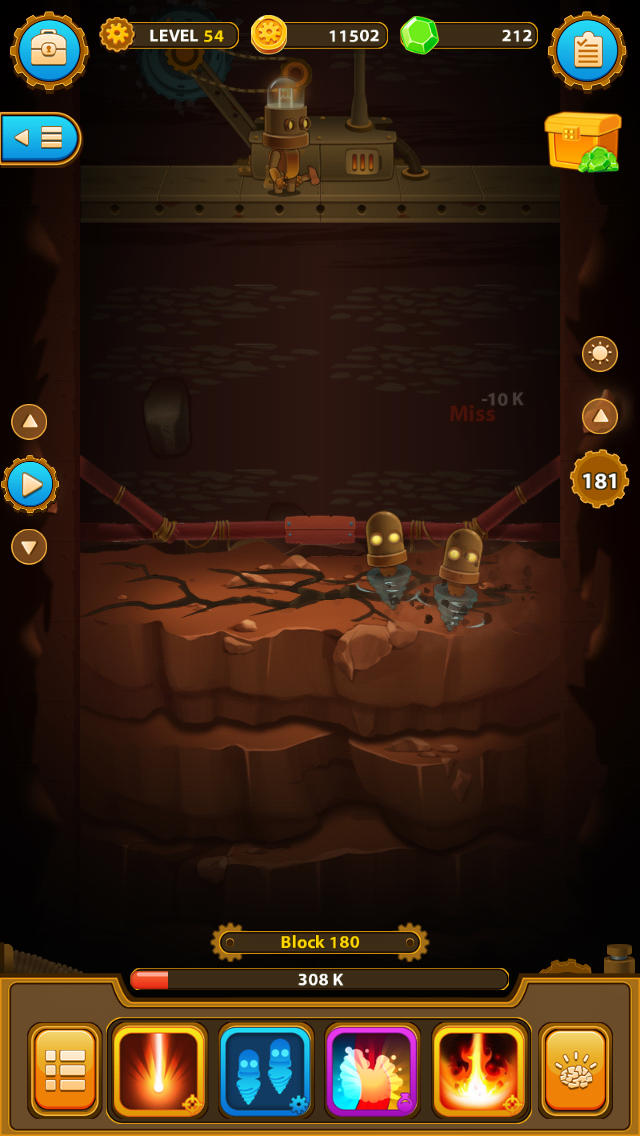 Although you’ll need to control the digging tools that will help you reach ever-further beneath the planet’s surface, the process of digging is fairly straightforward. You deploy objects—like the Laser Zap and Disposable Bots—by tapping their respective icons. Each item has a cooldown period before it can be used again, usually taking a few seconds to recharge, but they are otherwise unlimited in their usage. Every layer of ground has a certain amount of HP, and once you’ve damaged a layer enough, it will break and allow you to being working on the next level. This process also unearths resources and metals previously embedded in the ground, like coal and iron.

As you dig deeper and deeper, the layers will become denser and harder to break, requiring you to spend money to upgrade your mining tools. To earn money, you can sell the unrefined resources you’ve unearthed, or you can process them into more useful items like iron bars and batteries. The floors you build aboveground will automatically process items into the object you assign them to. For instance, you can task your Smelter with crafting copper bars and it will use any copper you find to do so. You can then ask your Crafter to turn these bars into batches of copper wire. Most of your smelting and crafting will be done in the interest of money, but some special items or upgrades will require unique objects.

To keep resources coming in even when you aren’t able to break a layer, you can build mining outfits on previously-cleared levels that will excavate materials and store them until you check in and claim whatever they’ve collected (up to a limit). Once you reach a high enough level and build a Drone Bay, your drones can be assigned to pick up these materials automatically for eight hours straight, letting you rake in resources without worrying about storage limitations.

This is a fairly standard cycle in the clicker genre, but what keeps Deep Town engaging is its focus on progressing ever deeper in the mine shaft which seems to have an end point somewhere and solving the mystery of the planet you’re excavating. It’s not much of a spoiler to tell you that the world you’ve landed on is Earth, but there are no humans in sight and the ecosystem seems to have been destroyed at some point in the past. Extremely acidic rain is the only water anywhere and a series of caves around the fifth level of the mine shaft house relics of a civilization that once lived here.

Rockbite tells the story of this civilization through the items your Explorer Bots uncover, as well as logs you find embedded in layers that lead to a series of YouTube videos. Many of the blocks you encounter have been corrupted with seemingly sentient versions of the nearby resources, with coal-coated tentacles spreading up from some distantly rooted monster, indicating you’re not completely alone on this planet—but what happened to the people who used to live here, and where did these new creatures come from? 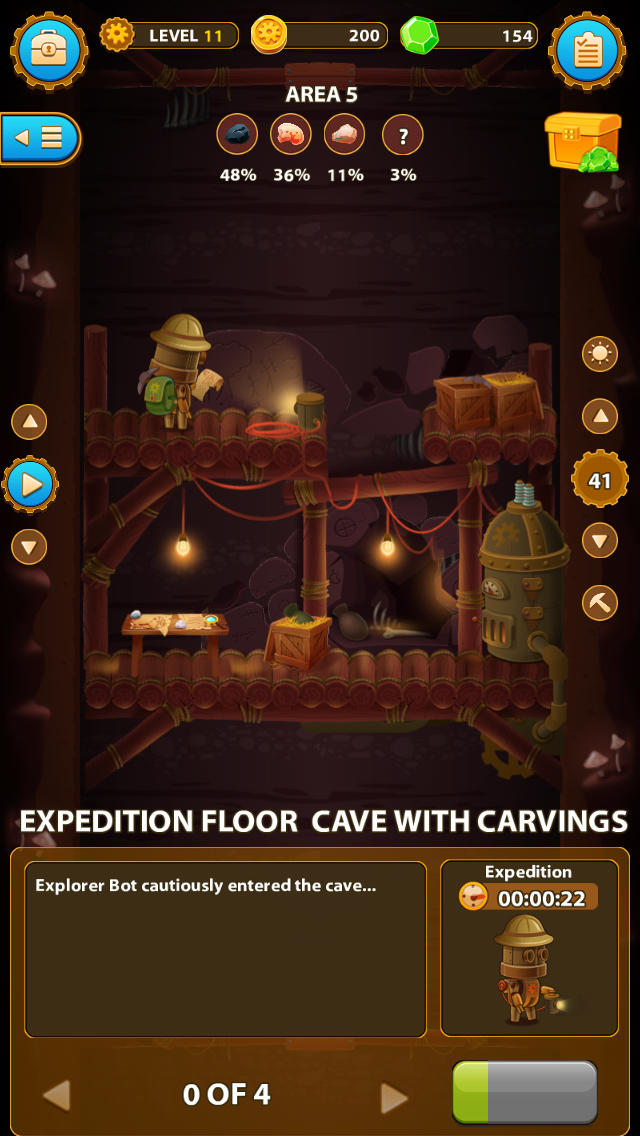 The mining, crafting, and block-destroying all become more complicated as you progress, requiring you to build items that will power special abilities and teach drones new skills to help you make it to deeper levels. Different areas contains different resources, and mining stations grow exponentially in price the more you build, meaning you’ll need to move stations to the areas with ore you currently need. And while your deployable abilities become stronger as you level up, you’ll be taking on blocks with millions of HP and some with regenerative skills that will challenge you to dispatch them quickly and thoughtfully.

All of this is presented in a beautiful, highly polished environment that is aesthetically consistent and engaging. The brown and yellow tones and almost softened graphics are reminiscent of Steamworld Dig or Machinarium, as is the focus on automation and robotic workers. Your little mechanical characters are animated as they go about their tasks, with drones stirring the smelting pot, workers hammering away at mining stations, and Explorer Bots donning backpacks and pith helmets as they venture into uncharted caves. Even though the digging process can become a bit repetitive, it’s always beautiful thanks to the colorful and complex animations that zap rock into dust and leave a cloud of smoke bubbling above superheated layers. 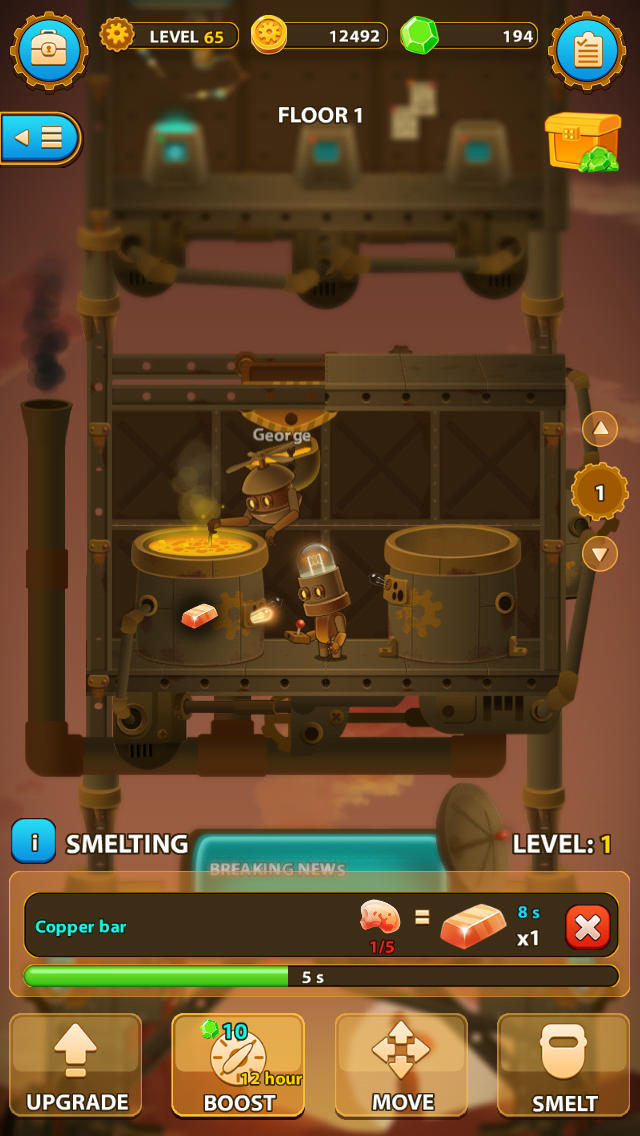 I personally find myself losing interest in most clicker-style games after the first day or two, but Deep Town has held my attention all week. It’s a lovely, mysterious adventure that uses the mechanics of a clicker to make you feel like you’re slowly answering a world-changing question. Although earning money is one of its goals, it feels like a lesser goal in the greater interest of reaching the bottom of the mine shaft, learning what happened on this planet, and building a new type of life with your robot companions.