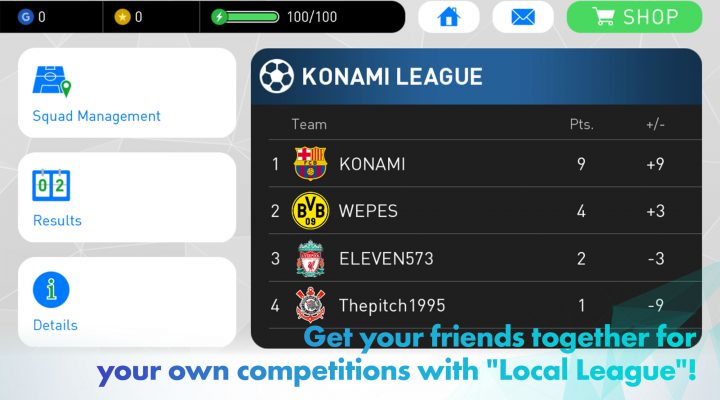 Konami’s PES 2017 has done a great job of bringing full-fledged soccer (or football, depending on what the beautiful game is called in your neck of the woods) to the masses on phones and tablets. But let’s say you want to play against a few friends head-to-head without jumping through too many hoops.

Now you can, thanks to the game’s new Local League game mode. If you can grab three mates with PES 2017 mobile on the same operating system (i.e. everyone on iOS or everyone on Android) and get within Bluetooth connectivity range of the hosting player, you can find out who’s really the best among you in the most direct fashion imaginable.

To celebrate the launch of Local League mode, Konami is making some special in-game rewards available from Aug. 30 through Sept. 6. The Local League campaign will dish out the following goodies:

You’ll also notice that PES 2017 on mobile looks a little different, as superstars Luis Suarez and Pierre-Emerick Aubameyang have taken over the app icon and are now the focus of the in-game graphics as well.

So what are you waiting for? Time to round up some friends and play some soccer, and if you can’t play the actual sport, going head to head on your mobile device is the next best thing. Check out the Local League fun by downloading PES 2017 for free today, as you can grab it from either the App Store or Google Play.