Marvel Contest of Champions Welcomes Spider-Man: Homecoming to the Battlerealm 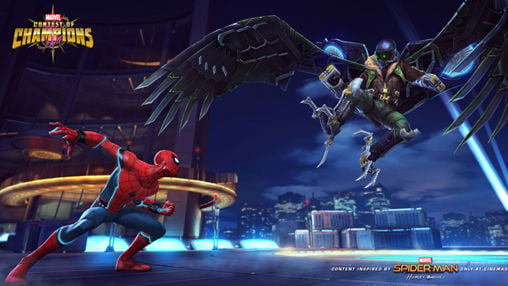 Spider-Man, Spider-Man, does whatever a spider can! We’re pretty sure this famous refrain doesn’t feature in the upcoming Spider-Man: Homecoming movie, and we can report with certainty that you won’t hear it in Marvel Contest of Champions, Kabam’s mobile Marvel fighting game.

It’s still relevant, though, because that game is getting down with the new film in the form of Stark-Enhanced Spider-Man, who will join the fray in the Battlerealm come Thursday, July 6 at 10 a.m. Pacific time. It’s still Peter Parker doing whatever a spider can, just better, presumably, thanks to some of Iron Man’s undoubtedly patented technologies.

Tony doesn’t give away the good stuff for free, though, so if you log in right now, you can take a crack at Stark Assignments. These are quick quests that appear at regular intervals throughout the day, and completing as many as possible in July can earn you some cool and Spidey-themed rewards. Plus we get to see what kind of mentor Stark is for the next generation of superheroes, the wall-crawler included.

There’s also a new Event Quest called Battlerealm: Homecoming (synergy FTW) that sees Peter become entangled in the schemes of the Black ISO Mafia. With the help of the Vulture, villains are taking advantage of a frightening new power source, and it’s up to Spider-Man to prove himself to Iron Man and the Avengers by putting a stop to it.

Kind of a heady adventure from a super-smart but otherwise normal kid from Queens, eh? We’d expect nothing less, though, and it should be just as fun to put Spider-Man through his paces in Marvel Contest of Champions as it will be to hopefully taking down the Vulture in Spider-Man: Homecoming later this week.