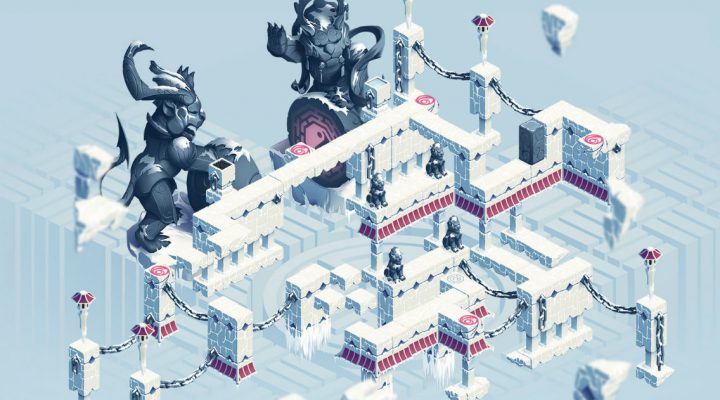 Consoles and PC have been home to stylish puzzle games since Brøderbund’s Myst. Mobile platforms have had a comparatively late start building up a showcase of artful brainteasers, but it’s catching up in leaps and bounds. One of the platform’s greatest success stories is Monument Valley, a mysterious and intensely atmospheric platforming title from ustwo that received critical acclaim from nearly every review outlet, including our own humble establishment.

Paplus’s Ghosts of Memories, out now for iOS and Android ($2.99 USD), appears to follow the path blazed by Monument Valley. There’s intrigue, puzzles, and an isometric top-down view of the action. But Ghosts of Memories tells its own story and offers up its own flavor of myth and mystery.

The story involves a traveler on a quest (you) who seeks to free a mysterious woman from a crystal. You’re gifted with a scepter that moves objects around, thus helping you solve puzzles. Now, if I had a scepter like that, I’d build the world’s largest cat condo for my kitties. But that’s why nobody entrusts me with the power to save the world.

If you’re interested in puzzle games driven by mysteries and soothing surroundings, or have been hoping for someone to deliver a game similar to ustwo’s incredible Monument Valley, Ghosts of Memories may be what you need after a hectic day. Check it out.

Close Your Eyes and Fight in ‘A Blind Legend’