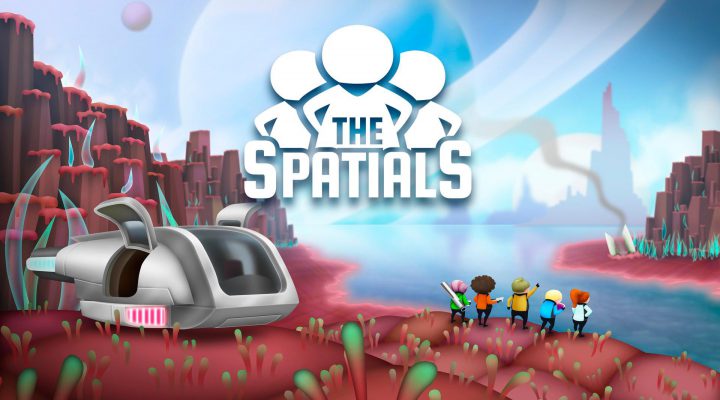 With an average of 500 games launching every day on iOS, a few gems will unfortunately slip through Gamzebo’s coverage cracks. Some of these are still keeping us up at night. In an attempt to sleep better and bring even more great titles to our readers, we’d like to pay homage to these in our new series, “Games We Missed.” The first entry in this series is a surprisingly deep space station sim released last year: The Spatials.

The Spatials launched in May 2014 as a free download hiding a premium experience: first-time developers Weird and Wry (the two-brother team of Carlos and Max Carrasco) opted for an ad-supported economy coupled with only a few in-app purchases that awarded the standard (and only) currency in the game. However, with almost no PR or marketing done for the game before or at launch, The Spatials landed on very few radars and became a mostly unknown gem hidden in the App Store black hole. 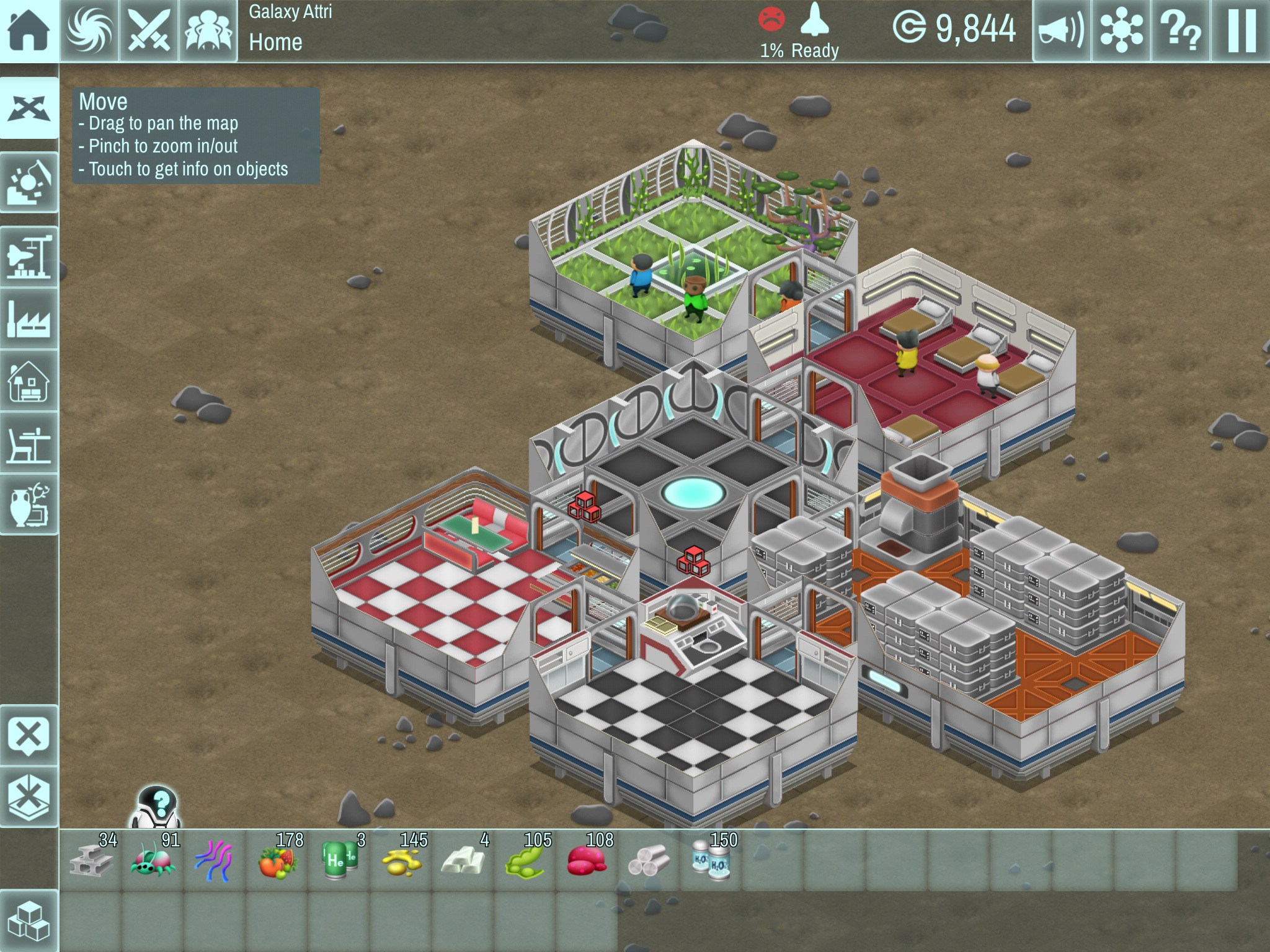 While this original release was already a surprisingly deep and charming space station simulation, a recent update has upgraded the game to match its PC counterpart, turning it into a fully premium title with tons of new content and gameplay. We stumbled upon The Spatials a few months ago and enjoyed it quite a bit, but after the new update, we can’t keep this to ourselves any longer.

Part rymdkapsel, part Startopia, and part Star Trek fanfiction, The Spatials spans a variety of genres while making each an interdependent aspect of progression. Its first focus is on space station building, putting players in the shoes of a Human Federation officer tasked with building up a thriving base in an uncharted section of the galaxy.

Starting with nothing but a teleporter room and five recruits, you’ll work your way up to a sprawling asteroid station that can not only support your ever-growing team of scientific professionals, but also attract and maintain an ongoing wave of astro-tourists. Unlike base defenders rymdkapsel and Star Command, your home in The Spatials is a safe haven that never falls under attack, allowing you to focus on the functional and economic aspects of a permanent space habitat and all the minute details those entail. While this begins as merely arranging enough beds for your team to get some rest, it soon evolves into assigning food processors to create rations and popping out souvenirs for your wallets-on-legs guests.

The battle aspect takes place off-asteroid, on planets you choose to explore. The universe of The Spatials is surprisingly detailed, and galaxies are stocked with planets of varying mass and form to levels almost on par with Mass Effect. Your recruited team of specialists has a long list of missions available to tackle on each world, from story-based assignments that open up new galaxies and opportunities to recurring bounties that award extra resources and equipment. Each ground mission allows up to five recruits to attend—one from each class—and usually involves finding a specific artifact or wiping out a threat to the local inhabitants. Planet exploration is in real-time, allowing you to wander freely by tapping to move your squad and engage in battles by tapping on an enemy. 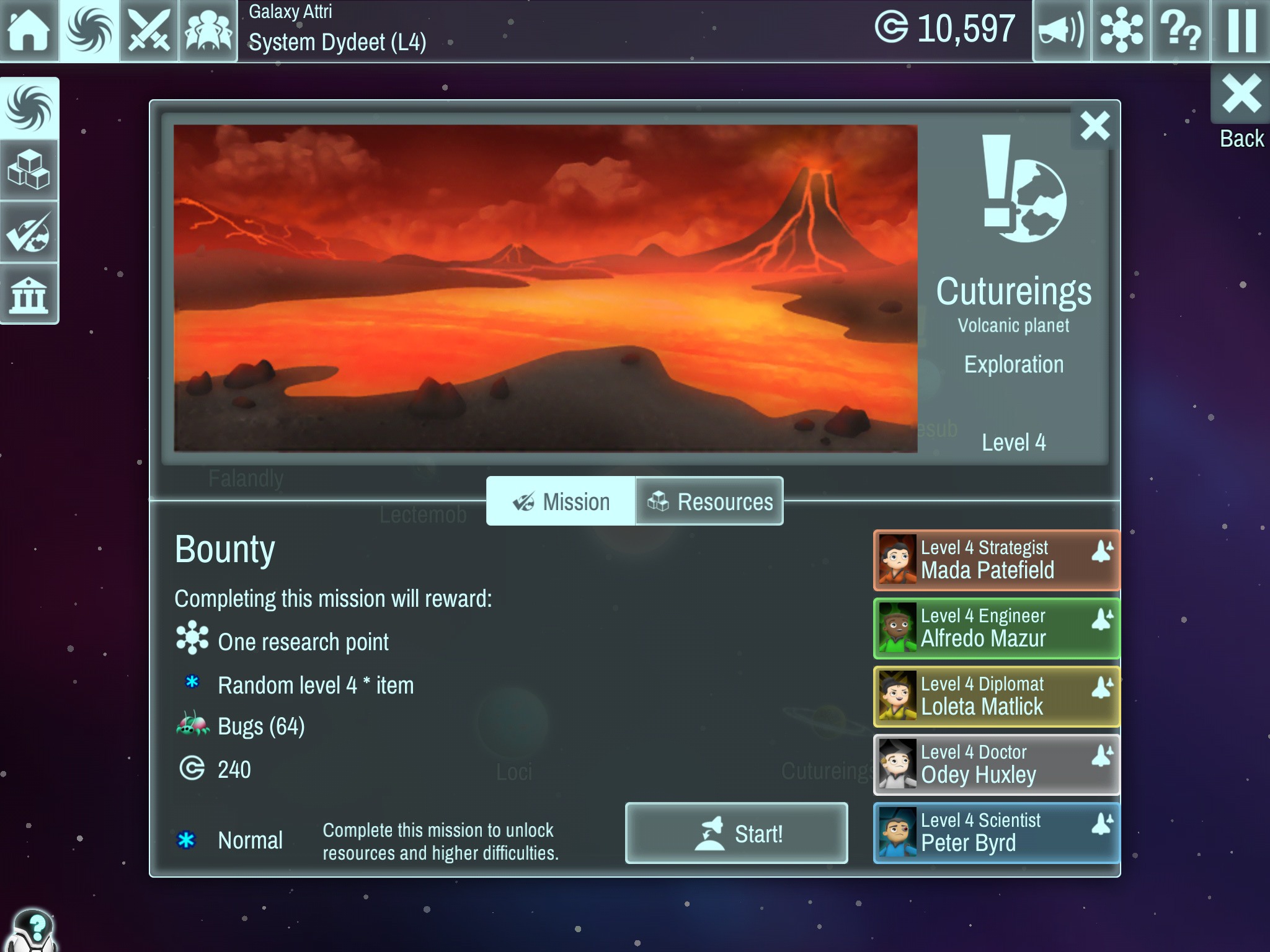 Because of this openness, it’s easy to accidentally wander into a cluster of space pirates unawares, but luckily you have a number of skills at your disposal. Every recruit carries a sidearm that allows them to weakly auto-attack a selected enemy. Each class also has a special, manually-activated skill to improve your armaments: Engineers have powerful area of effect attacks, Diplomats impart slowing and other negative status effects, Strategists can snipe enemies with high-powered weaponry, while Doctors and Scientists restore teammates’ health and skill-associated energy, respectively. All of these abilities, along with other passive skills—such as health and regen boosts—can be customized and upgraded by finding or purchasing new skill equipment.

Although space station building and planet exploring are the two primary active gameplay components, there are plenty of other features that tie into your overall growth and game plan. A separate bounty system lets you build up EXP and equipment by sending any free officers on automatic away missions (think the recruit missions from Assassin’s Creed: Brotherhood). You can assign officers to sit on galaxy’s embassies in order to improve the resources you earn from loaned extraction points. A tech tree offers hundreds of rooms and items to unlock and add to your station. And all the while, you’ll need to balance resource earning, item production, and recruits’ needs and wants in order to maintain a happy team and a thriving station. 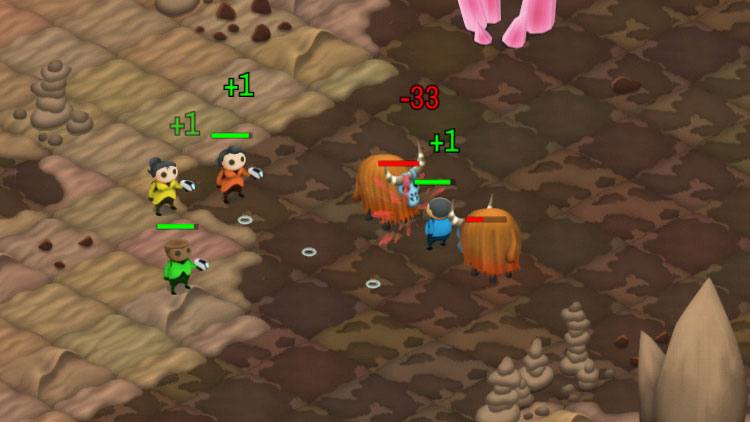 And these are just the highlights, without delving into the humorous and charming details woven throughout the game. Your staff are mostly interchangeable, but they also have personality quirks like favorite foods—“luxury dinner” for my Doctor and “exquisite roll” for my Strategist—and objects—most of my team wants “advanced soap” right now, if that’s an indication of the station’s current hygiene level. Story missions feature playful characters and results, like a haughty talking tree or a dishelved look of shock permanently plastered on your commander’s face, even in her minimized icon form.

There’s so much to see, do, and enjoy in The Spatials that even having played the year since its launch, you would only have begun to scratch its endearing, alien surface: the stuff that apps dreams are made of.

You can pick up The Spatials for your own iPad from App Store.