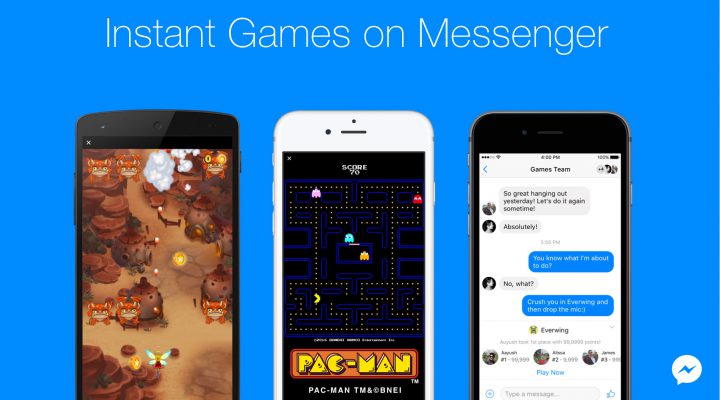 There used to be a time when Facebook was the king of casual gaming, where titles like FarmVille ruled people’s personal feeds. Then smartphones happened, and while the shift to mobile games wasn’t immediate, it was dramatic.

Now Facebook wants some of those gamers back, and it’s setting out to get them with an app everyone already has and the help of a number of well-known franchises and developers. The initiative is called Instant Games, and it’s live now on the Messenger app and within the Facebook News Feed of all you dinosaurs who still use Facebook on your PCs.

(I say that lovingly, as I do the same thing.)

Part of the hook will be that Instant Games are truly cross-platform, in the sense that people will be able to play the same titles inside Messenger or in Facebook News Feed and “discover new games through recommendations, posts, challenges, and the Facebook Pages of individual games,” according to a Facebook blog post announcing the service.

The other draw figures to be the games themselves. Thanks to a partnership with a number of companies, the debut list of 17 games is packed with titles that need no introduction, ranging from arcade classics to notable mobile IPs:

It’s not hard to see what’s in it for the developers, who have a chance to get their games in front of a crazy large audience. That includes a lot of people who might not normally play mobile games, which is kind of what enabled the rise of the original Facebook gaming craze.

“We are excited to work with Facebook to feature two of our classic IP’s, PAC-MAN and Galaga on the new Instant Games platform,” a Bandai Namco spokesperson said in a press release. “To give the opportunity for our global fans to access these classic titles on mobile and web, we are working with Facebook to allow users to play Instant Games on Messenger and Facebook News Feed, both of which have significant reach around the world.”

How do you jump into Instant Games? Just look for the game controller icon in Messenger, right below the place you normally use it for, you know, messaging. Just don’t blame us if you end up doing more gaming than chatting.