Home / Play / Down the Mountain: An Eternal Descent, Arcade-Style

Down the Mountain: An Eternal Descent, Arcade-Style 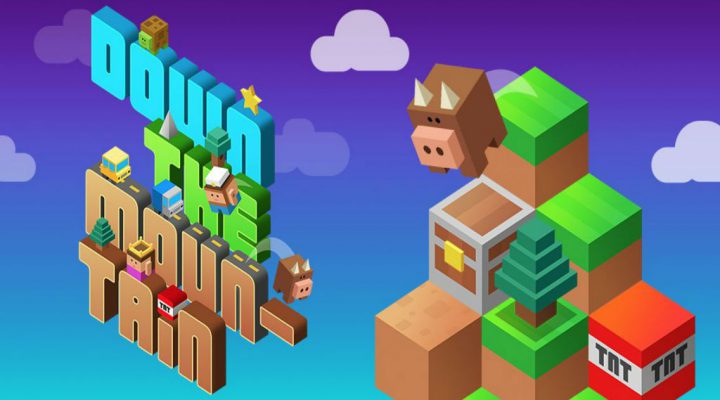 If Hipster Whale’s Crossy Road is meant to teach us that a game of Frogger can stretch into infinity, then Umbrella’s Down the Mountain demonstrates that it’s possible to play a round of Q*bert forever and ever and ever — or at least until the fun is cut short by a spike, a bobcat, or a puddle of poison.

Down the Mountain’s visuals heavily resemble Crossy Road’s “boxel”-style graphics, and like its inspiration, Down the Mountain also lets you collect avatars galore. But those similarities are merely skin-deep. Whereas Crossy Road’s terrain is fairly stable, Umbrella’s game challenges you to hop down an infinite mountain one block at a time, much like the aforementioned Q*bert. And, like Q*bert, one misstep can mean your end.

But you won’t find Coily, Slick, or Ugg in Down the Mountain. Instead, your foes are cracked blocks (which give out when you jump on them), spikes, hopping bobcats that will make a meal out of you, inexplicably hopping cars that will turn you into roadkill, and even poison spills that nail you with a death sentence if don’t pick up the antidote ASAP.

There’s more to your journey than mere survival, though. With luck, you may pick up stray keys lying around the playing field, and then you might stumble across the chests they belong to. Doing so opens up new avatars, though you can also unlock your boxy pals by meeting certain goals outlined whenever you start a new game.

Down the Mountain seems like a natural progression for the boxel-based arcade craze. It’s cute and it’s fun, even though it’s missing some kind of counterpart for Q*bert’s curse-filled death scream (You know the one: “@#$*!”). It’s free, so grab it off the App Store.

Tricky Block is a Tricky Treat for Puzzle Fans

Don’t Starve: Pocket Edition – Die Slowly from the Comfort of Your Couch