Home / Play / Dawn of Titans Has (Finally) Arrived, and We Played it Early 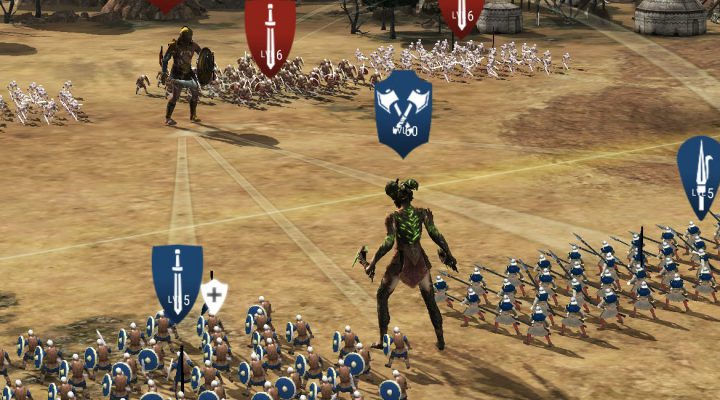 Mobile games don’t tend to become vaporware as often as their console cousins, but every now and then a title gets announced to a great deal of fanfare and you just sort of forget about it. You’d be forgiven if you did that for Dawn of Titans from Zynga and NaturalMotion.

First officially announced in early 2015, Dawn of Titans promised to bring stellar, console-quality graphics and real time control of large numbers of troops to Clash of Clans-style strategy games. Then it just kind of went radio silent for a while, except for an announcement that the game would be delayed to the second half of 2016.

In reality, Dawn of Titans was in soft launch for much of that time (though not in our go-to territory of Canada) while NaturalMotion ironed out the rest of its kinks. And with 2016 running out of calendar pages, Zynga made good on its promise, since the game is now live. 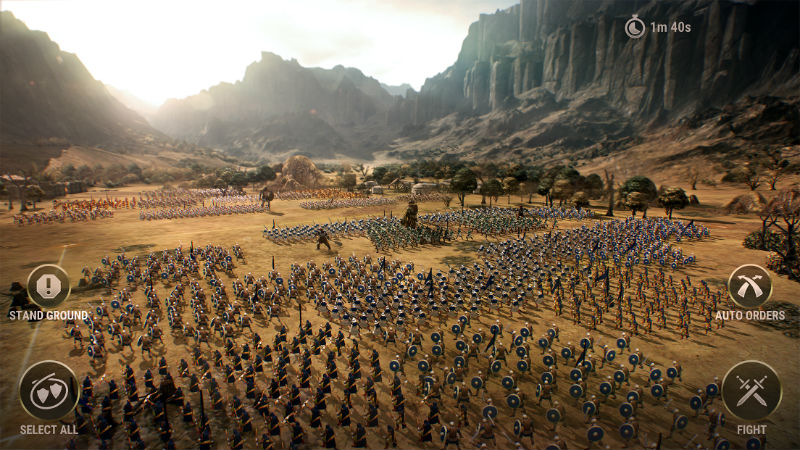 Thanks to a pre-release video conference with NaturalMotion and a (very) brief time with a pre-release build, we can tell you that Dawn of Titans delivers on much of its original promise right off the bat. Its visuals are indeed impressive, as everything from your castle and surrounding countryside on a floating island to the Titans themselves is packed with detail. NaturalMotion CEO Torsten Reil was especially proud to point out that there’s no loading times involved in anything, from examining your buildings to exploring the larger game world.

In battle, control of units is made simple with tap and drag controls so you can send them exactly where you’d like them to go. There’s strategy behind both the forces you send into combat and how you utilize them, allowing players to, as Reil described it, “punch above your weight” and overcome superior forces with smart tactics. Yet the stars of the show are definitely the Titans, huge beings that can send normal troops flying with a swing of their mighty weapons. 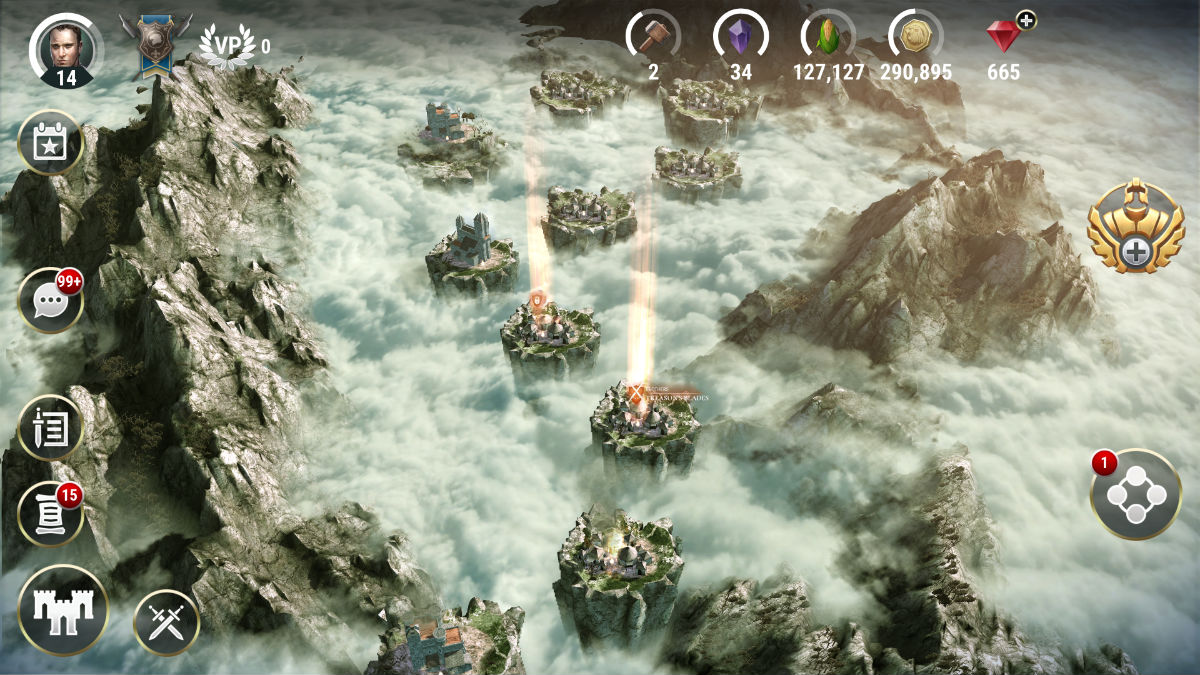 There’s a strong PvP element to any game of this type, and Dawn of Titans obliges with alliances players can join for protection and to battle through its league system. Weekly seasons begin every Monday, and several different activities can earn victory points for an alliance, including raids on other players and attacks on neutral sites as well. Reil admitted that the league system was inspired by European soccer (or football, if you prefer) leagues, where the top few alliances get promoted to the next highest league and the bottom three are relegated for the next season.

Perhaps the most innovative system that Dawn of Titans introduces is the way its world map works. As players add more capture more lands, they appear as floating islands surrounding their main plot, giving a way to instantly gauge the relative strength of any player. That applies to the alliance level as well, as players are physically grouped together with their teammates, and instead of using a coordinate grid, one simply taps on a land to target and a link appears in alliance chat so other players know where to focus their energies. 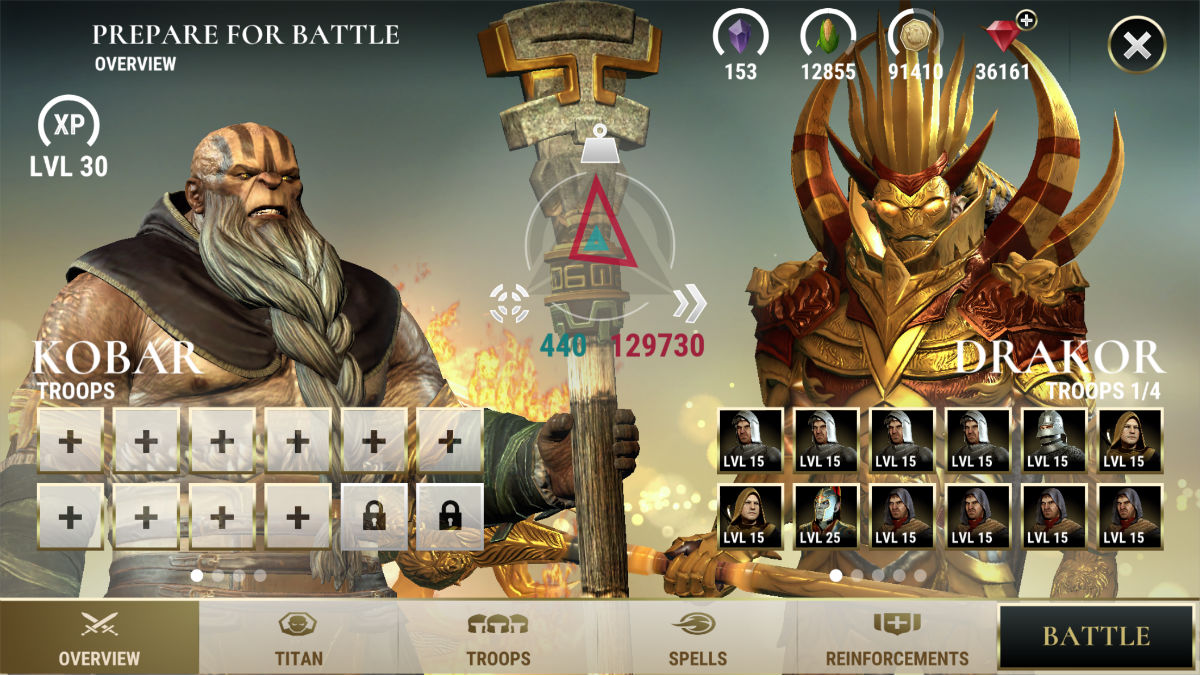 During its extensive time in soft launch, Reil said that one of the things NaturalMotion learned was how much people enjoyed the single-player content, burning through it much quicker than expected. As a result, the studio has a writer devoted strictly to developing new story and scenarios to tackle solo, ensuring there’s something fulfilling to do besides PvP.

None of this means Dawn of Titans is guaranteed to be a hit, of course, but it’s comforting to know that all the time it’s been laying low has been well spent. We’ll have a review and much more on it as soon as we’re able to get fully acquainted with the release build, but you can jump in now by hitting the App Store or Google Play and downloading the game for free.

Crashlands Juicemancy Update Trailer is Everything