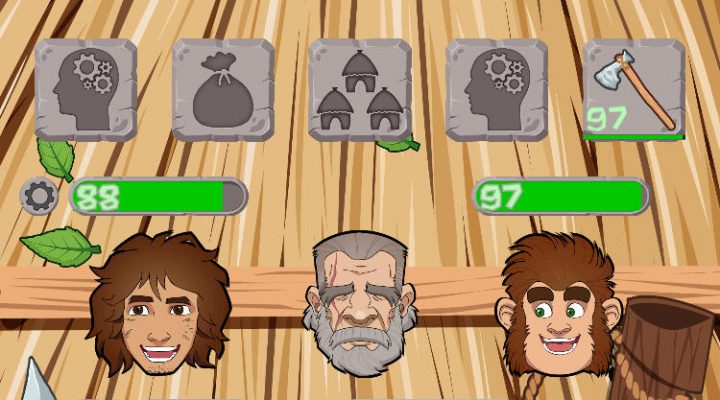 Dawn of Crafting is a streamlined simulation that puts players in the role of a Homo Sapien during the Stone Age. Your primary goal is to craft simple items and tools that will not only help you survive, but also build up crafting knowledge and uncover more complex recipes as you progress. For instance, you begin the game with the ability to peel bananas to make them more edible, but once you craft a knife you can cut your peeled bananas into slices that refill even more health when consumed. Crafting requires energy and eating crafted foods restores that energy, creating a cycle of creation and consumption throughout the game.

Of course, you’re not just crafting snacks: foraged trees and vines can be turned into tools like axes, which can be used to chop down trees for logs and bark. These can eventually be turned into other tools, containers, and even the building blocks for your own village. There’s a persistent path of growth since every item you fail to craft—creating a gelatinous “goop” instead—rewards EXP that improves your skills and level, which is the basis for the types of recipes you’re knowledgeable enough to attempt. The game takes place almost entirely within the crafting/inventory menu, where you add up to three different types of items and one tool—such as a rock or your fist—to the current recipe before hitting “craft.” 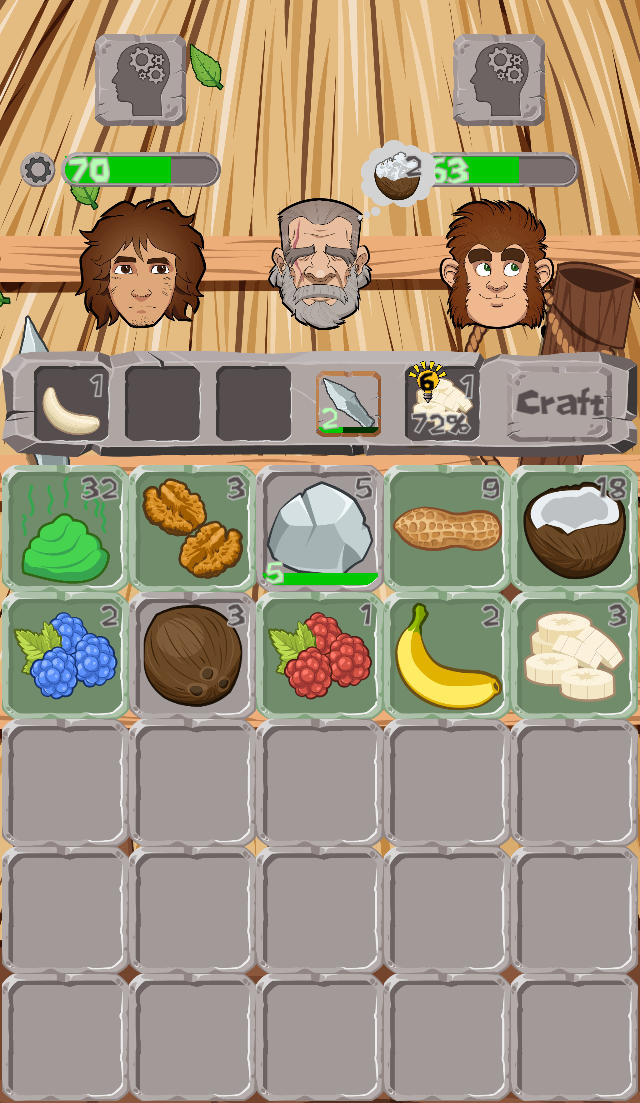 In order to gather new components for continued crafting, you send your “Minion” out into the world and let him retrieve random items while similarly building experience, gathering low-level goods like worms and oranges early on and expanding out to eggplants and turtles and more over time. The randomness of the items he gathers means you sometimes have to be patient as you wait for just the right return, but everything can be used for some purpose and level of growth. Sometimes a foraging trip will yield a special event, like a discovery of a bird’s nest or another hunter, which asks you to make a decision—climb the tree and loot the nest; share some of your food with the traveler?—and different outcomes immediately or down the road depending on what you decide.

There’s a surprising amount of depth to Dawn of Crafting that its simple interface belies and a lot of careful design considerations that keep its lengthy, branching crafting paths from becoming overwhelming. A recipe book tracks all the creations you’ve learned, hints at those you’ve yet to uncover, and lets you quickly pick a recipe to craft so long as you already have the ingredients on hand. You can craft multiple items at once simply by placing more items in your recipe slot, although you risk losing numerous components if the recipe fails. Your mentor, Alf, provides guidance on what you should work toward crafting next, keeping your goals in perspective and offering hints on undiscovered recipes.

These features and touches were arrived at after more than a year of development, during which the two-brother team behind Dawn of Crafting released the game live on the App Store and treated their worldwide launch like an open beta. The earliest downloadable version did not even have graphics: its crafted objects were simply text boxes which listed the name and quantity of the items on hand. They used player feedback from reviews, forums, and the /incremental_games subreddit to shape the experience from its origin as “Crafter Game” to its current iteration. In 2016 alone, developers Demi and Goku released 61 updates to the App Store, directly crediting their players in the patch notes for every suggestion and idea that was implemented. While post-launch updates and bug fixes are common in the digital marketplace era, Dawn of Crafting took that means to a fascinating extreme, creating a concrete trail directly on the App Store that documents the game’s growth from a simple idea to its current fully fleshed out version.

As the brothers explain in their short history of the game’s development: “We are not the types of people who can stick to a game in stealth mode for 2 years and release it, we needed that feedback adrenaline… Any good idea we received that we could build, we built it.” Their “official” launch last week was essentially their decision that the game was ready to share openly and that they may be able to scale back from weekly updates. Players who discovered Dawn of Crafting in early 2016 got a chance to watch that plucky development style in action, while the rest of us now get to enjoy the game that emerged from those constant iterations and tons of good ideas.