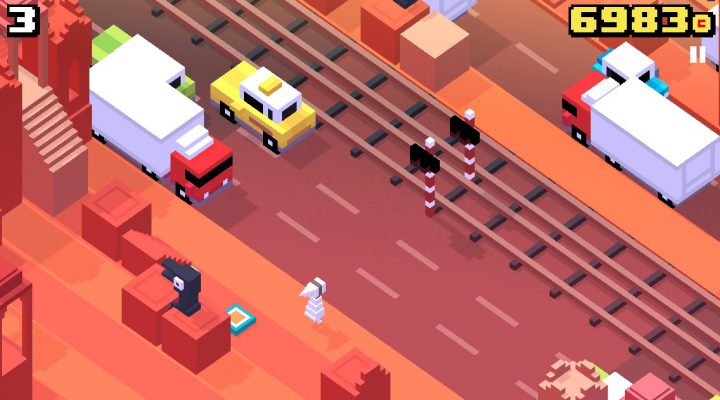 Yet another Crossy Road update released this week, introducing nine new characters and bringing the total of playable figurines up to a whopping 124. Last month’s update was all about Pac-Man and friends in honor of Pac-Man 256’s launch, and this week’s update follows in a similarly game-celebratory vein.

Four of the new additions are characters from gorgeous minimalist puzzler Monument Valley. Playing as any of these will change the standard Crossy Road world into a slanted variation on Monument Valley’s colorful, abstract levels. Two of the characters are from Land Sliders, an unsurprising crossover considering Hipster Whale is both an investor in and advisor to freshman developer Prettygreat. And the final three newcomers are visiting from voxel shmup Shooty Skies, a recent release from Mighty Games, which was co-founded by some of the Hipster Whale team.

You might wonder how airborne animals locked in dogfights could fit into the road-crossing universe, but Hipster Whale has made some clever concessions to explain why they’re grounded, with adorable results.

Eight of the characters can be won via the gacha prize machine or bought outright for 99 cents. The ninth is a secret unlock, although thankfully he’s not as tricky to uncover as the Pac-Man ghosts or some of the other past unlockables (we’re looking at you, Rugby Player). If you want more details on the characters or how to snag the secret one, check out our ongoing Crossy Road Character Guide for more.

Shooty Skies, a Game from (Most of) the Crossy Road Team, Is out Now