Crash of Cars Goes Medieval on Players in Latest Update 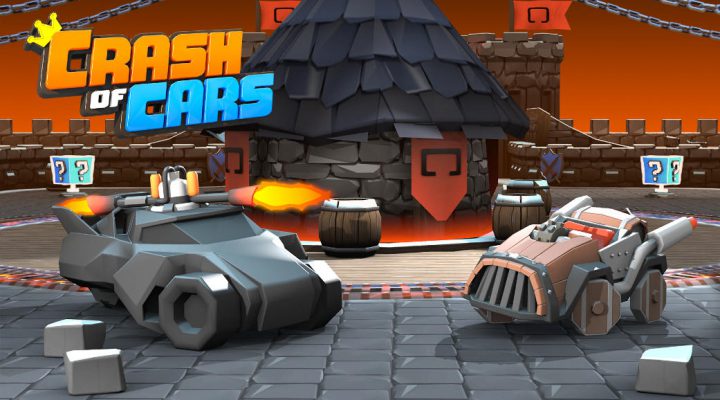 We’ve been following Crash of Cars‘ updates closely here since developer Not Doppler has been consistently bringing new and interesting changes to their not even four-month-old game, and because we honestly just really love playing it. It’s been amazing to watch the game grow and improve, from the thoughtful new maps to the balance tweaks to, of course, all the new cars added to the roster of unlockables. This week’s update features all three types of enhancements, as well as some secret vehicles that are so fiendishly well-hidden we can’t imagine where the next set might show up. 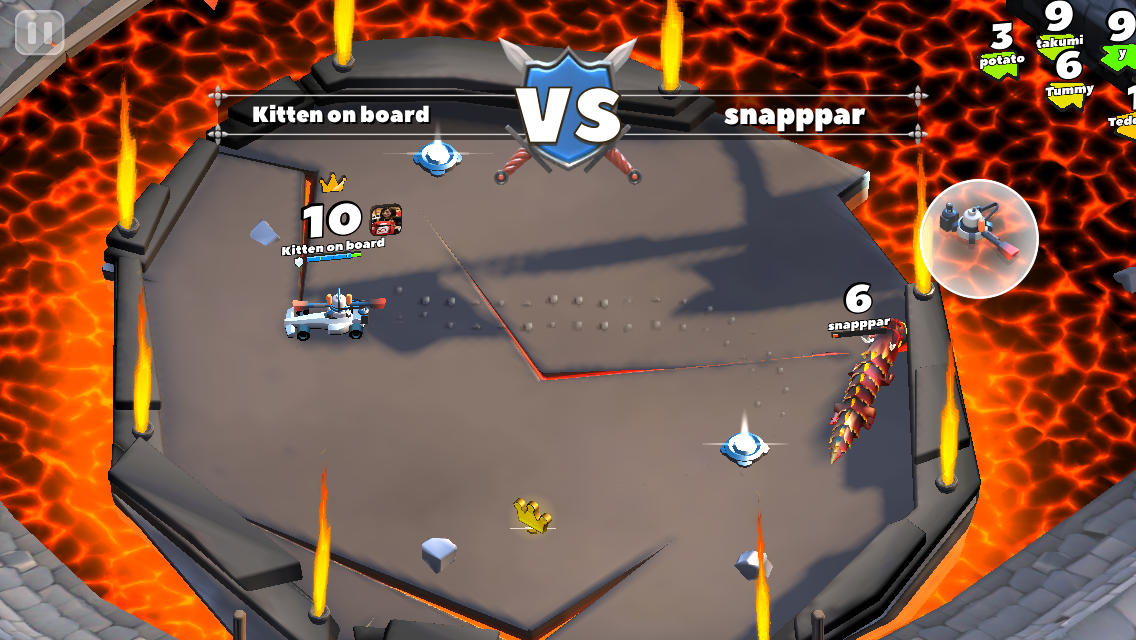 The biggest addition is, of course, the new map, which brings the total locations in rotation up to eight. Castle is a medieval fortress with a large central courtyard leading out to four distinct areas: to the east and west are gigantic catapults which will fling your vehicle across most of the map if driven onto. Spiked, swinging cannonballs guard the paths to these catapults and cause significant damage to any drivers caught off guard (or shoved into one by an opponent).

To the north is a large wooden gate bordered by two towers and guarded by a dragon emerging from a pool of lava. The northern corner is the least active—the dragon is (currently) only decorative—but it fits the aesthetic nicely and is fun to drive past.

On the opposite end, to the south, lies the arena. Once two players cross the drawbridge and enter the octagonal battleground, the bridge is withdrawn, revealing a river of lava beneath and the only way out via defeating your challenger (or teleporting away). It’s an epic one-on-one mini-battle that feels right at home on this deadly new map. 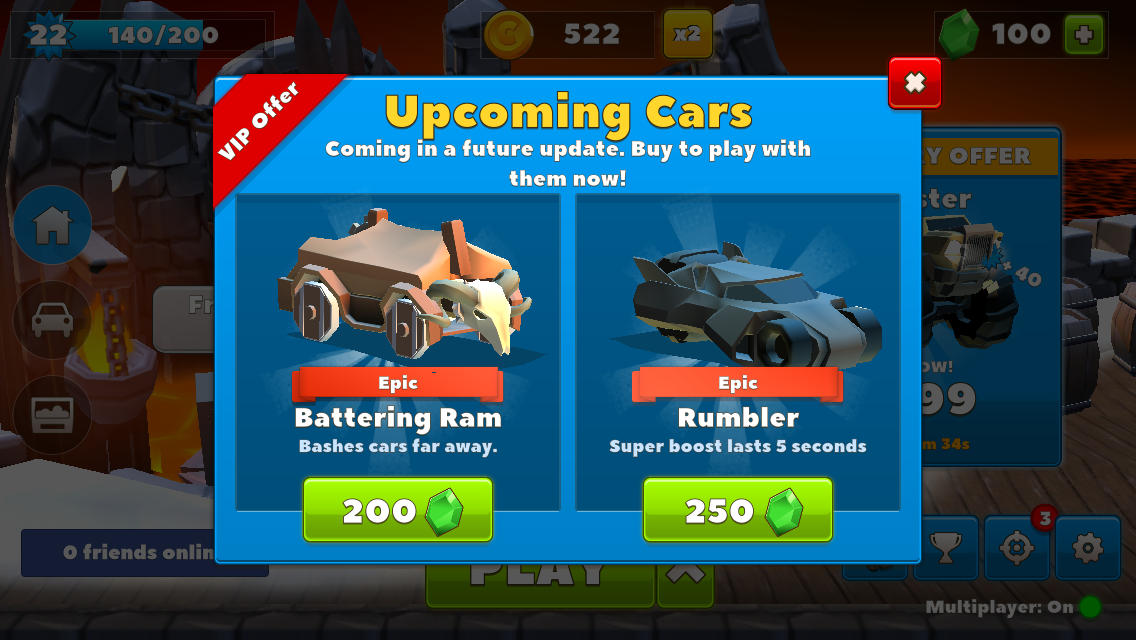 A number of the newly added cars tie in with the medieval theme, including the War Wagon, War Car, and upcoming Battering Ram. The much more futuristic and very obviously Batman-inspired Rumbler is available for 250 gems and has an Epic power of increasing Boost to five seconds. The most exciting additions to the garage, however, are the two hidden cars. In the last update, Not Doppler introduced the idea of secret cars with two vehicles hidden on specific maps which required precise actions to uncover. The community figured out the trick to these cars pretty quickly, so for this update it seems the developers wanted to offer a slightly tougher challenge.

The result is one of the most ludicrously well-hidden cars imaginable, but how do we know how well-hidden it is? The Crash of Cars Facebook community banded together and found it only a few hours after the update went live, and a number of players have already earned both vehicles. If you’d like details on how to find either of the hidden cars from this update, we recommend visiting the Crash of Cars Facebook page. We won’t spoil it here, even though knowing how to get the cars is only a small step toward actually unlocking them. 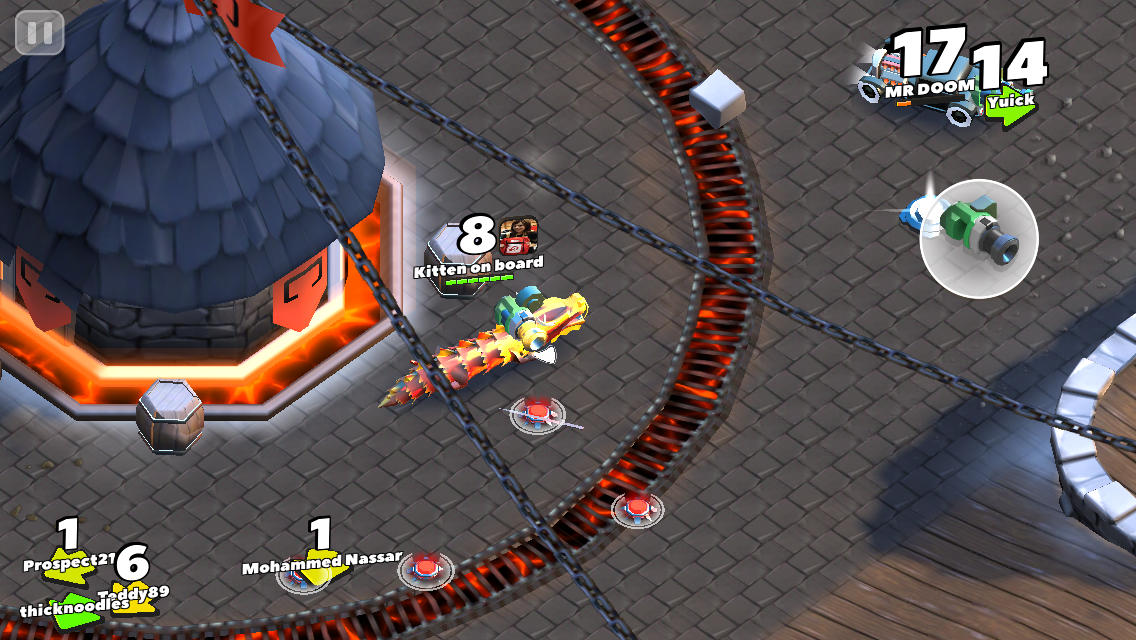 The other changes from this update seem small in comparison, but they’re still significant for dedicated players. Landmines now have a much longer lifespan before disappearing, and they do not damage the player who placed them. Your own landmines are designated by a white outline so you know if you’re driving near ones you dropped previously. The Hovercraft’s hover time has been increased significantly, allowing it to stay above water for a whopping eight seconds now. This actually makes the Hovercraft extremely useful on stages with water as it can not only dodge into a body of water to avoid an enemy, but has time to actually escape to a different location if need be. There’s also a joystick control setting available now. Although we personally prefer the button control scheme, we can definitely appreciate having more options.

Between the new map, new cars, hidden cars, tweaks, and not-even-mentioned bug fixes and additional skins, this is a massive update for Crash of Cars and its fans. It’s available now on iOS and Android.