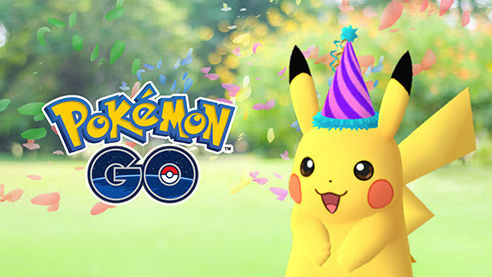 Happy Pokemon Day! What’s that? You didn’t see that on either your Google Calendar or your old school paper calendar on the fridge?

And yet it’s a real thing we didn’t make up. February 27 is Pokemon Day, declared as such in celebration of the very first Pokemon games released more than 20 years ago. The Pokemon Company has all kinds of things going on today as a result, but we’re most interested in how it affects Pokemon GO.

Beginning today at 1 p.m. Pacific/4 p.m. Eastern time, Pokemon GO players will encounter a special friend out in the wild. You know him as Pikachu, and he’ll be sporting a party hat from now through the same time on March 6 (so for a full week).

Not such a huge deal, you say? That’s fair, and you may recall that Pokemon GO did more or less the same thing at Christmas, putting Pikachu in a Santa hat instead. But people do love their limited time only characters, and since this is supposed to be the only time you’ll be able to catch party hat Pikachu — and he’ll likely be easier to find out and about than he is the rest of the year — it’s still going to motivate some players to get out there and hunt for him.

Besides, it’s Pokemon Day, and you’ve got to do something to honor the occasion. Whipping out your phone is probably the easiest way to accomplish that. Have fun, and tell Pikachu we said hi.

Final Fantasy Brave Exvius Gets Even Braver in Version 2.0 Update