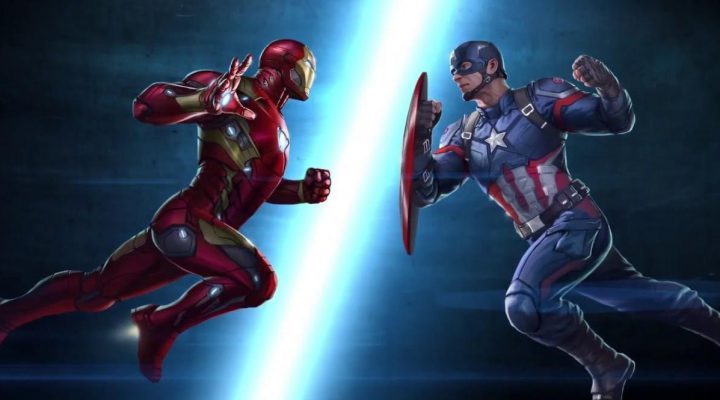 If it seems like everyone is choosing sides these days, it’s not because there’s a pick-up football game about to go down (good thing too, since this writer might be chosen last). Nope, it’s because Captain America: Civil War is almost upon us, getting ready to invade theaters across North America on May 6 — and really the evening of May 5, if we’re being technical.

Marvel Entertainment and D3 Go! have welcomed this latest Marvel Cinematic Universe blockbuster with open arms in the form of a special Civil War in-game event that kicks off on May 5. Naturally, you’ll be asked if you stand with Team Cap (along with Ant-Man, Falcon, Hawkeye, Scarlet Witch and more) or Team Iron Man (who counts Black Panther, Black Widow, Vision and other heroes on his side).

Making that decision will determine if you end up fighting special boss versions of either Captain America or Iron Man. But either way, you and your alliance will be able to work together to acquire 5-star versions of two very apropos Epic Characters: Steve Rogers (First Avenger) and Iron Man (Mark XLVI). Even better, recently released Winter Soldier is the character needed to run through the first set of Civil War nodes, while upcoming release War Machine will help you finish the second set.

D3 Go! already revealed a 30-second video to tease the event toward the end of April, but Gamezebo is proud to offer an exclusive 60-second gameplay video that shows just how deep this particular Civil War goes. Enjoy!

You don’t have to wait for the movie or the event it’s inspired to grab Marvel Puzzle Quest, which you can do right now from the iOS App Store or Google Play for Android.