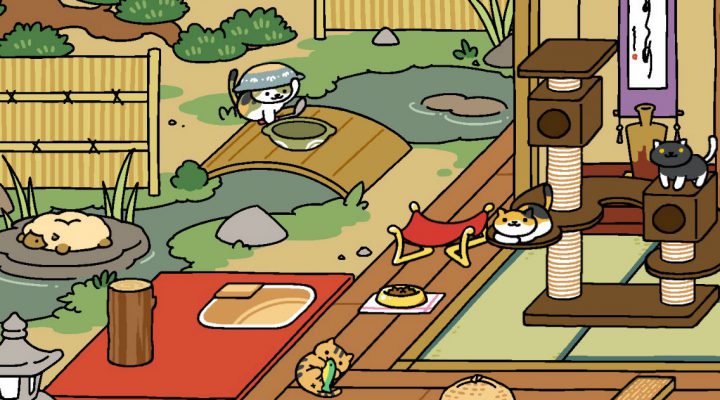 If the world wide web has a totem animal, that animal is the cat. Housecats, specifically. Felis vulgaris. Millions of internet users have rallied under the banner of these fascinating animals that domesticated themselves purely on their own terms and have been worshipped ever since.

Sidenote: The words “cat” and “banner” bring to mind a cat leading a parade of devout followers with a little flag tied to its tail. My heart just sighed.

So it’s no wonder many cat lovers, myself included, have jumped over the fence and into the Japanese App Store in order to get their hands on an app called Neko Atsume. Neko Atsume translates into “Cat Collection,” which pretty much describes the experience. You collect cats, and you watch them do their kitty things. That’s all the app offers, but that’s all it needs to offer.

After seeing pictures of my friends on social media going “Squee!” over their own virtual cats, I used an excellent walkthrough to help me find, download, and play Neko Atsume for myself. The game’s brief tutorial, which relies mostly on visuals, instructed me on how to lay down food and toys in my garden and attract furry visitors. Within moments, I had a white cat tumbling a ball of yarn in its paws, and a striped grey cat sitting in a box, its fat face fixed with a catlike smile of utter contentment.

And then I knew I was in a lot of trouble.

Playing Neko Atsume is a bit like birdwatching, except the game’s adorable stars would probably slaughter any birds that dared cast a shadow over your digital garden. As long as you have food and toys available, cats will wander in and out at their leisure and interact with toys in varying ways. They roll, they climb, they scratch, they sleep, and sometimes they just sit perfectly still and ponder how exhausting and difficult it is to be a cat. Every cat you see is chronicled in a notebook, and you can take pictures to remember your meeting by.

When the cats are done freeloading, they leave the garden to attend to other kitten business — but not before “paying” you with fish. These fish come in two varieties: Silver and gold. Gold fish are rarer than silver fish, but both currencies can be used to buy more toys and better food to attract more cats. You can also buy house expansions so you can stuff your life full of more cats. That’s called a smart investment.

Unlike most games that involve looking after a digital pet, Neko Atsume doesn’t hold your heart hostage by threatening to starve your animal to death if you don’t check in fifty times a day. The cats simply leave. Stupid as it sounds, it does a number on your heart when you open the app and find the food dishes empty and the garden deserted. But to bring back your pals, all you need to do is set out some kibble (or some sashimi, if you’re feeling magnanimous) and check back in a few. Rest assured, if you feed them, they will come.

If you’re interested in doting on some electronic cats, Neko Atsume is free for both iOS and Android. The tutorial linked above instructs you on how to download both versions.  There’s a reason why Japan reigns as the Supreme King of Cute Stuff. See for yourself.