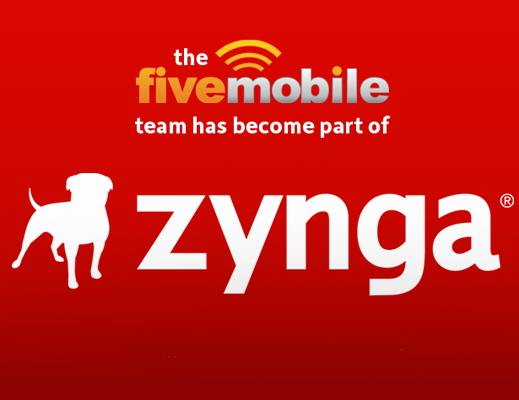 With fresh new releases like Hanging With Friends and CityVille Hometown under their belt, Zynga’s made no secret about their desire to make a footprint in the social mobile landscape, just as they’d done with the world of web-based social gaming before that. The company has made yet another acquisition to bolster their mobile initiative, this time purchasing the Toronto-based mobile development firm Five Mobile.

Their 15th acquisition in only 13 months, Five Mobile – or Zynga Toronto as they’re now called – will be working on “advancing multiple initiatives within Zynga mobile,” according to Zynga’s official statement released earlier today.

Five Mobile’s founders will all be staying on board, with Ameet Shah heading up Zynga Toronto and reporting directly to Zynga’s mobile team leader David Ko. In addition to the acquisition of the studio, Zynga has also acquired select assets and IP’s belonging to Five Mobile.

Staking a claim to some Toronto territory is a smart move for Zynga. With mobile developers ranging from Capcom’s Beeline Interactive to indie talent like Capybara Games and Big Blue Bubble all located in or around the city, Canada’s biggest town is one of mobile game developments biggest hubs. If they’re looking to snag fresh talent, it would seem north is the direction to travel.