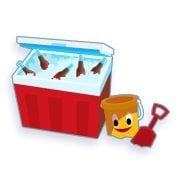 Two of the founders of Blue Fang Games — a studio that brought us the venerable PC series Zoo Tycoon, as well as social games like Zoo Kingdom and Where in the World is Carmen Sandiego? — have announced a brand new venture called Beach Cooler Games, a studio that will focus on mobile and social game experiences.

No games or platforms have been announced yet, but we know who at least two of the people behind Beach Cooler are: Hank Howie (president and CEO) who formerly ran Blue Fang for more than a decade, and Lou Catanzaro (vice president and creative director) a 16 year game industry vet who helped found Blue Fang.

“Beach Cooler is a brand-spanking-new game development studio specializing in the creation of high quality social and mobile games,” the company explains on its website.

“We are long standing and successful veterans of the game industry and we are excited by today’s new game frontiers available to both developers and players alike! Our goal is to bring the highest quality games to market and to be of the utmost value to our partners and our players worldwide.”