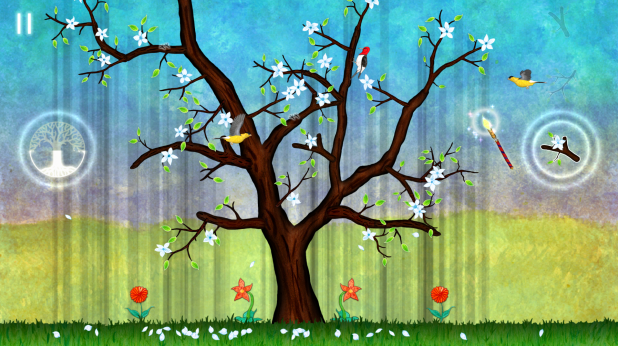 Husband and wife development team Backward pieS are celebrating the release of their tree-growing puzzler with a 50% off discount sale. For a short amount of time, Let There Be Life is available for $4.99 on IndieGameStand, with Desura and Humble Store options coming in the near future.

In Let There Be Life, the player must strategically grow a tree so that the leaves and branches do not overshadow the flowers on the ground around the tree. Self-described as a “watercolor painting come to life”, Let There Be Life presents players with a stress-free atmosphere that can be appreciated by gamers of all skill levels.

Speaking of levels, Let There Be Life boasts 34 of them – all designed as hand-painted watercolors – for players to enjoy.

Speaking to Gamezebo, Backward pieS developer Jason Seipl revealed that the mechanics of the game came out of a casual miscommunication between himself and his wife.

“My wife suggested a game where the player builds trees, such that light can still get through to plants on the ground,” Seipl explained. “But she meant it as kind of a maze mechanic, with paths of light twisting & turning to get through the leaves. I took her meaning to be that each added branch added to the shadows cast by the tree, and the player needed to add them in such a way that not too much shadow fell on the plants. It was only after I set up the proof-of-concept that we realized we weren’t on the same page! Thankfully she liked my approach better so I didn’t need to rework anything.”

Visit Let There Be Life’s official website and pick up the game on IndieGameStand.

This Week in China: A little bit of communism, a whole lot of capitalism

The House of Mouse just got a whole lot smaller; Disney Interactive lays off 700