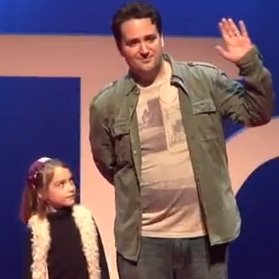 In the summer of 2011, Untold Entertainment released Sissy’s Magical Ponycorn Adventure, and it really got people buzzing.  Why?  Because unlike past efforts from Untold, the game wasn’t made by indie developer Ryan Creighton alone – it was made by Ryan and his 6 year old daughter Cassie.

As a parent to a nearly 8 year-old daughter myself, I couldn’t agree more.

Ryan’s presentation is only seven minutes long, but its seven vital minutes for anyone with even the slightest bit of interest in the future of today’s kids.  The education system no longer keeps up with the world it’s meant to be preparing kids for, and Ryan does a fantastic job of outlining why.

“We should be teaching our kids to be creators, not consumers; masters, not mere participants,” says Creighton.  “My hope is that one day, a father making a video game with his daughter will just be a natural way to spend a Saturday afternoon, like taking a swimming lesson or doing a homework assignment together.”

In my own experience, I’ve been shocked at how little education my third grader has received in terms of technology.  She can read and write printed letters exquisitely – and I’ve been told cursive may be on the horizon – but there hasn’t even been a hint of keyboarding instruction yet.  If kids can’t type properly by the third grade, how are they expected to learn all of the technological teachings that should come after?

Childhood is when we as a species are at our most creative.  Giving kids the tools to create with is just good sense.  And in the 21st century, those tools include a good set of programming skills and a mastery of computer fundamentals.

If Ryan’s video leaves you hungry for more fresh thinking, be sure to check out this recent post on his blog that explores this issue in even greater detail.

Bonus fun fact: if you’re wondering what the kids are playing in the schoolyard when they play pretend nowadays, it’s not cops and robbers.  At least, not in my daughter’s school.  Playing pretend Minecraft is the be all, end all of every recess.  And when it comes to creativity, pretending to play Minecraft feels a little like Inception.  Creatively pretending to be creative.  We’d be idiots to not give this generation more tools to build with.