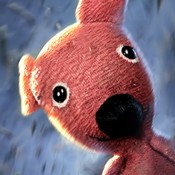 I’d like to take this opportunity to formally announce that Gamezebo is switching focus and becoming a film-centric website. Okay, that’s a lie, but if there was any movie that might get me to consider it, it would be Kooky. Released on iTunes yesterday by Amanita Design, the feature-length puppet film tells the story of a lost stuff bear’s quest to survive in a fantastical woodland wilderness. And it’s absolutely oozing with heart.

Though, frankly, what would you expect from a film created in part from one of the minds behind Botanicula and Machinarium, and directed by Academy Award-winning Czech filmmaker Jan Sverák? From the storyline to the dialogue to the wonderful puppetry, everything shown in the trailer hints at the same type of dotingly crafted, deeply personal world building seen in Amanita’s game library. Yet despite the more overtly kid-friendly through line of a boy and his lost puppet, Kooky looks like it will also have its fair share of Tim Burton-style moodiness. During his journey to find his way home, the innocent, animate stuffed protagonist seems to have his world view rocked by darker, more hardened creatures – some not so friendly. Think of it as a cross between James and the Giant Peach and Where the Wild Things Are.

But don’t take my word for it! Check out the movie’s detailed release trailer to see what the work of one of our favorite game creators looks like outside of the interactive space (though to be fair, the app comes with several small mini-games!). Bonus points on the part of the film’s production team for snagging Jeremy “Scar from Lion King” Irons to narrate!

Let us know what you think in the comments below! Is Kooky somethin you’d buy to watch with your friends or family? Do you feel it has the same spirit as Amanita’s other work? And for that matter, would you like to see more of this type of content here at Gamezebo. We read every reply, so let us know!