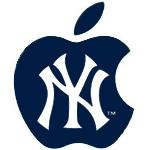 Thinking about squeezing in a few innings of Flick Baseball or MLB Power Pros Touch 2010 on a big screen while you’re waiting for the first pitch to be thrown at Yankee Stadium? You’d better think again. Yahoo! Sports is reporting that the Yankees’ security department is sending ticketholders home who show up to the park with Apple’s latest must-have item.

After hearing reports that a fan was turned away at a recent Yankees/Red Sox game for trying to bring their iPad with them, Yahoo! Sports contacted Yankees security for comment. Much to everyone’s surprise, the story turned out to be true. iPads fall under the “no laptops” rule in their existing security policy, thereby banning the device from the stadium.

While not being able to bring your iPad to a Yankees game really shouldn’t be that big of a deal (you’re there to watch the game, remember?) I can’t see how it could possibly be a security threat. For that matter, I can’t imagine how a laptop could pose a problem either. It’s a baseball stadium, not an airplane.

Regardless, if you were thinking of bringing along a big screen device for your big league day – presumably to enjoy the exceptional radio coverage provided by MLB At Bat – you’d better opt for the iPhone instead.