Home / News / With World Wide Maze, every website is a game

With World Wide Maze, every website is a game 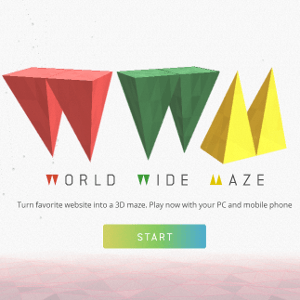 Following the success of Super Sync Sports, Google has released yet another browser-based, smartphone-controlled game. Called World Wide Maze, it turns every website on the Internet into a playable marble maze.

The mechanics of World Wide Maze are similar to most recent marble maze games. You tilt the controller—your phone in this case—and guide a marble from point A to B. It’s fun enough, but the real joy comes from seeing your phone and computer interact in such an interesting way. World Wide Maze and Super Sync Sports aren’t the first games to do this, but as one might expect from a company the size of Google, they’re certainly two of the best.

While World Wide Maze works great for the most part, I did experience some latency when first firing it up. It took a bit for my phone and PC to begin communicating properly, and the initial lag caused me to perform way worse than I would have otherwise. That went away after a few minutes of playing, however, so don’t give up on the game right away if it isn’t functioning correctly from the get-go.

What does everyone think of Google’s recent game experiments? Are they fun in their own right, or coasting by on the power of their own novelty? I personally see them as a wonderful starting point for the company, and I sincerely hope they continue to dabble with the idea of smartphones and PCs communicating with one another.