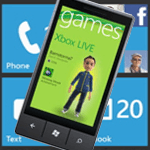 The term “iPhone killer” gets thrown around a lot nowadays, and it’s a silly term at best. Like it or not, the iPhone is here to stay until Apple drops the ball in some significant way – no one phone, company, or platform is going to kill it. The term people should be using is “iPhone competitor.” What company is ready to go toe-to-toe with Apple in the mobile phone business?

Blackberry made a valiant effort but caters to a totally different market, so it’s really hard to call the two true competitors. Android seems to be leading the current anti-iPhone charge, but it’s hard to gauge if that’s because they have the potential to take on the big dog or simply that they’re the only real challenger in the ring. Windows Phone 7, though? That’s a platform with potential, and its release is creeping right around the corner.

While it’s a device with countless features and functions, the vast majority of iPhone usage seems to revolve around gaming. Back in February, a report was released showing that 53% of the App Store’s available apps were games. Clearly, iPhone users are a bunch that likes to play. To do battle with the iPhone means you’ll need to do battle with their games library – and who better to tackle this than one of this generation’s leading console manufacturers?

Microsoft knows a good thing when they have it. The Xbox brand is one of the most popular in gaming, so bringing that brand to Windows Phone 7 is a no brainer. Gamers on Windows Phone 7 will be able to access their pre-existing Xbox Live accounts to use while gaming on their phones. Every game will offer similar features to an Xbox Live Arcade title, including achievements totalling 200 gamerscore and free trials for every game. It’s a familiar set up, and it’s this familiarity that may be key to Windows Phone 7’s success.

While the iPhone may have a large and devoted following, there’s an even larger group of people who remain undecided on which smartphone is right for them. By offering a system that’s an extension of something they’re already using (Xbox Live), gamers in this demographic may quickly be enamoured by what Windows Phone 7 has to offer.

But no gaming platform can succeed if it doesn’t have the games to match. Microsoft seems to be doing everything they can to make sure they have a strong catalogue of games in their launch window, with top iPhone developers reportedly being paid cash up from to port their games to the platform.

iPhone ports alone would make Windows Phone 7 little more than a copycat device (albeit an enticing one thanks to Live gamerscore and free trials), but Microsoft knows when it’s time to break out the big guns. Microsoft has just unveiled 50 titles for the platform, with a number of first-party Microsoft Game Studios titles included among the list. Existing franchises like Halo and Crackdown will be getting the mobile game treatment, while new titles like the Game Chest series andilomilo will be making their debuts.

Some of these titles manage to explore great new ideas that, despite offering more than 35,000 games, have yet to be explored on the iPhone. Take Crackdown 2: Project Sunburst for example. It’s a tower defense game that lets players create their own stages anywhere in the world using Bing Maps. You can set up defenses on your neighbor’s lawn as the baddies come streaming up your street, headed straight for your house. Exclusive games like this could easily give Microsoft’s mobile efforts a leg up on the competition.

Future games may even tie into the Xbox 360 experience, allowing players who complete certain tasks on their mobile phones to unlock in-game content on their console counterpart. While none of the current games offer such features, Microsoft’s mobile gaming honcho Kevin Unangst has recently told Gizmodo that “the plumbing exists for us to build those kinds of experiences.”

By pairing a hot new product with a monumentally successful service, Microsoft is clearly paving the way to take on the iPhone for the mobile gaming crown. Whether or not it’s enough to unseat the current king is anybody’s guess, but one thing’s for sure – the iPhone is finally going to see some real competition in the world of gaming when Windows Phone 7 is unleashed into the wild later this year.