Win your very own Luke Skywalker in Battle For Hoth contest 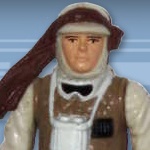 If you didn’t have the chance to pick up Star Wars: The Battle For Hoth when it was released last month, you missed out on a great deal of snowy tower defense fun. Developer FluffyLogic has just released a free LITE version, and to celebrate they want to quite literally put the battle in your hands!

Earlier this week on their official blog, FlufflyLogic announced a contest where the prizes would consist of two classic Star Wars action figures from the 1980’s. The first prize winner will become the proud owner of Luke Skywalker in Hoth-appropriate clothing. The second prize winner will score a Snowtrooper, dressed for warmth and ready to do battle with the Rebel Alliance. There are prizes for runner-ups as well.

So how do you win? Submit an iTunes review of the game using four words or less. Complete details are available in FlufflyLogic’s blog post, and the winners will be selected on September 9th.

Good luck, and may the force be with you!