Home / News / Why Kickstart when you can Indiegogo? [interview]

Why Kickstart when you can Indiegogo? [interview] 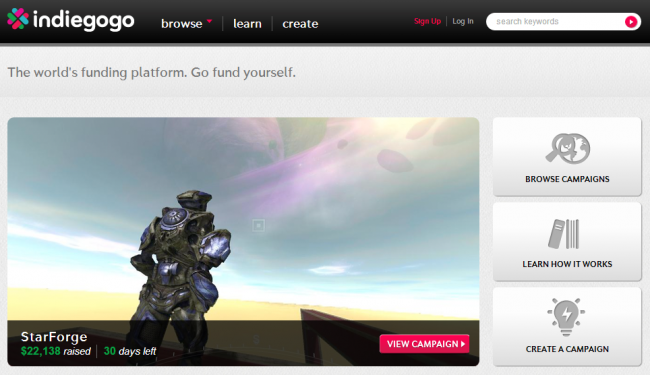 When it comes to raising money to produce a video game, few words have garnered as much attention in the last few years as “crowdfunding.”  But while Kickstarter might be the biggest dog on the block, it wasn’t the first crowdfunding site on the web, and it may not even be the best.

As Kickstarter gets more and more crowded, developers are quickly looking for alternatives to raise the funds they need – and Indiegogo seems to be cementing itself as the alternative of choice.  We recently talked with Indiegogo’s games guru John Vaskis to find out just why that is.

For those unaware, what are some of the differences between Indiegogo and Kickstarter?

Indiegogo differs from its competition in some key ways. Indiegogo is a global and open platform; anyone can create a campaign from virtually anywhere in the world at anytime. It is a true meritocracy as there is not a gatekeeper at Indiegogo who picks which campaigns go live – every campaign has an equal opportunity. We use a merit-based algorithm, which is called our Gogo-Factor, where campaigns are promoted based upon comments, updates, funding, social media push etc.

Lastly, we offer two different types of funding – flexible funding and fixed funding. Flexible funding means that whether or not you hit your goal, you get to keep whatever money was raised. The last thing you would want to do is to launch a campaign, promote it for 40 days, only to find yourself coming up $1,000 short of your $50,000 goal and receive nothing for your time and effort.

It seems like you guys are a little less restrictive of what campaigns people can launch through your service. Has this affected the types of games you’ve seen on it?

Indiegogo has an open platform so anyone can start a campaign anywhere at anytime. This has led to a wide variety of gaming campaigns being launched on our network. We are very proud of the facet that so many games/hardware/gaming-related campaigns of all shapes and sizes have been funded on our platform.

Do you see any hurdles the crowdfunding model will have to overcome in order for it to remain a staple in the games industry?

I believe the only obstacle that crowdfuding faces is that some people perceive it as a new way to raise capital, thus making it a great unknown. This could not be further from the truth. In fact, the base of the Statue of Liberty was actually funded through crowdfunding.

As the number of games that were successfully launched through crowdfunding increases, supporters will see that their contributions truly helped create new great games. This will give the audience validation and thus make them more willing to contribute to subsequent game projects in the future. Crowdfunding is here to stay and will only continue to grow over the years.

With different crowdfunding site springing up pretty regularly, why should a game developer choose Indiegogo over the competition?

Indiegogo was the first crowdfunding platform, and has also had more crowdfunding campaigns created on our platform than any other site. For the duration of our platform’s existence, Indiegogo has been accumulating data on all of its campaigns along with contributor behavior associated with those campaigns. Thus, Indiegogo has the most data collected of any platform available. With this data, along with our differentiators (open platform, global solution, fixed and flexible funding) we can best help you fund your next dream game project.

Double Fine’s successful Kickstarter campaign certainly ignited a lot of interest in the funding model. Did Indiegogo a rise in campaigns afterwards, too?

Double Fine created an incredible crowdfunding campaign. I actually bumped into a couple of guys that work for Double Fine at Indiecade last week and personally thanked them for making crowdfunding a staple of the industry. Indiegogo has seen exponential growth in our games vertical month after month. 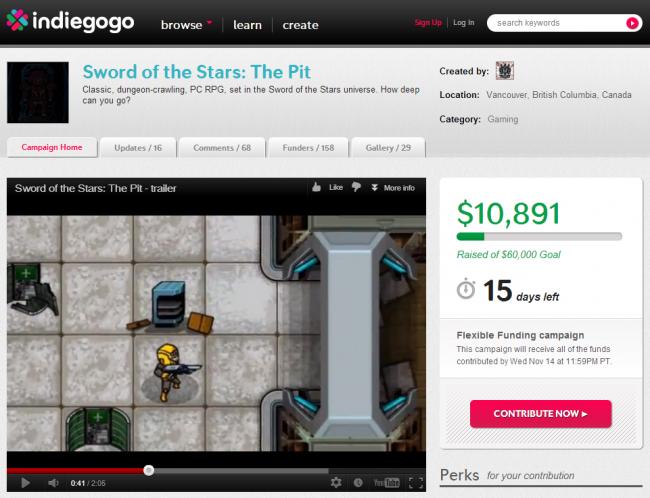 Are there any campaigns currently seeking funding you’d like to draw attention to?

Swords of the Stars: The Pit – A perfect mix of old school retro art combined with new school game mechanics in this action/RPG. Swords of Stars takes me back to the games of yore that I loved so much and I cannot wait to play this game.

Nevermind – This is a very unique horror game that is being created at USC. The player wears a sensor that dictates the player’s stress levels as the player becomes more stressed while playing the game, the harder the game will become and vice versa.

To that end, do you have any favorite previously-funded campaigns?

Resurrect ADOM development – It was amazing to see this classic game get brought back to life via Indiegogo’s network. This campaign also featured some amazing stretch goals

The Angry Video Game Nerd Movie – I am a huge fan of the Angry Video game nerd on GameTrailers so this campaign was right up my alley.

Thanks for your time, John!

Replay Wednesdays: Penny Arcade, Beauty and the Beast and more!