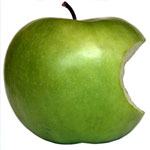 The war between Apple and Google in the mobile phone market has been heating up lately, especially in light of a recent NPD report that shows Android phones outsold iPhone’s during the first quarter of 2010. Apple has responded, suggesting that the report in question failed to gather enough data to really make a fair case. But is this little more than another example of Apple ignoring the threat that Android’s become?

“This is a very limited report on 150,000 US consumers responding to an online survey and does not account for the more than 85 million iPhone and iPod touch customers worldwide,” says Apple spokesperson Natalie Harrison in a recent conversation with All Things Digital. “We had a record quarter with iPhone sales growing by 131 percent and with our new iPhone OS 4.0 software coming this summer, we see no signs of the competition catching up anytime soon.”

The old adage “pride cometh before a fall” comes to mind. It’s not that Apple doesn’t have the talent and staying power to hold their own, but it’s also not the first time we’ve seen an electronics company underestimate the competition either. Harrison’s sentiments eerily echo those of Cammie Dunaway, an executive VP with Nintendo of America, when she discussed her company’s stance on the iPhone only two months ago: “It is interesting that for all of the talk of competition from Apple last year, here in the U.S. we had our best year ever, selling 11.2 million units.” In stark contrast, word leaked out earlier this month that Nintendo President Satoru Iwata viewed Apple as their “enemy of the future.”

Apple’s pride also rears its ugly head in their recent battle with Flash. Refusing to add it to their mobile platforms, regardless of the reason, means that they’ve created an opportunity for the competition. Google was more than happy to explore that opportunity, providing a great alternative for mobile developers who are more comfortable programming in a Flash environment.

Whether Apple is willing to admit it or not, Android appears to be more than just a flash in the pan imitator to their popular mobile OS. Google is really beginning to provide serious competition to Apple’s pocket behemoth – but will Steve Jobs notice before it’s too late?