Home / News / Where’s My Water? to get animated web series 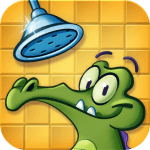 A few weeks ago, we posted up a behind the scenes video about Disney’s mega-popular iOS game Where’s My Water?. In it, Senior Game Designer Time Fitzrandolph said they were “trying to come up with new characters and new worlds that are worthy of Disney, but start as a game first.” Sounds like someone at Disney animation was on board with his sentiments, as the company has announced that Swampy will be starring in his own series of web animations in 2012.

A 12 episode season of 3-4 minute cartoons, Where’sMyWater?, the Adventures of Swampy will make its official debut this January – though eager gator fans can get a first glimpse in an exclusive preview on Disney.com this December.

No other details are known at this time, but considering the charming cast of characters and basic premise of the game, it seems like classic Disney-style hilarity should ensue once the series starts up early next year.