What’s the best way to sell the same game twice? 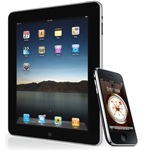 In response, publishers realized there was great potential in re-releasing popular iPhone games for the iPad. The question then became “do we charge a separate fee, or do we make the app universal to both systems?”

Both ideas have their merits. Thanks to the nature of the iPad, developers can justify a fresh price tag by tailoring the experience to iPad gamers and offering a slew of additional content that wasn’t available in the iPhone version. Just take a look at Monkey Island 2 Special Edition that launched earlier this week; the iPhone version may offer the complete game, but for $2 more you can get the iPad version that includes a developer commentary track and behind-the-scenes artwork. Other developers, like the minds behind Babo Crash, decided to maximise the appeal of their product by letting people pay once to play it on both devices. There’s even a middle ground – the developers of Carcassonne launched their iPhone version first, and while the iPad version will be a universal update, they’ve made no attempt to hide the fact that the price will be doubled once that update occurs.

Gamasutra recently sat down with the developers behind Canabalt, Flight Control and Implode! to discuss the pricing possibilities that iDevice developers have to face now that there are multiple devices to support. The different approaches that different companies take on the subject gives some great insight into why multiple-device offerings in the App Store look the way they do today. To gain a better understanding of the decisions publishers make, check out Game Strategies: iPad vs. iPhone on Gamasutra.com.

China’s The9 invests in Aurora Feint