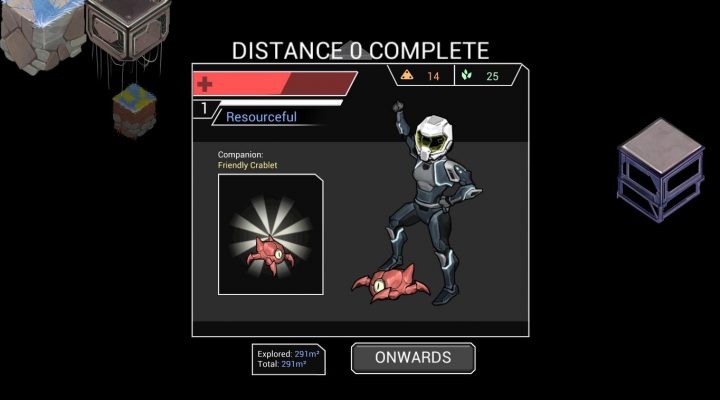 Today’s release of Shattered Planet on PC and Steam brings the formerly mobile-only, sci-fi roguelike to its originally intended home. The PC version includes everything we loved about its portable counterpart, along with an armada of enhancements that will provide new and experienced clones alike reason to keep returning to the deadly surface, no matter how many times they’re disintegrated. Gamezebo sat down with Tanya Short, creative director at Kitfox Games, and a preview copy of Shattered Planet to find out what’s new, improved, and even weirder in this version.

The first obvious difference players will come across is the switch to a full-priced, premium model. Shattered Planet on mobile is free-to-play and contains in-app purchases. The PC release costs $14.99 for the entire experience, with purchasables from the mobile version unlocked via in-game progression. “We always wanted to make it a premium game,” Short told Gamezebo, “but we realized that the central loop could potentially work as a free to play game too…and it might have, if we had been willing to really pump money out of customers. Instead, we kept [the mobile version] basically how we wanted it to play, and let people pay us if they wanted to.” 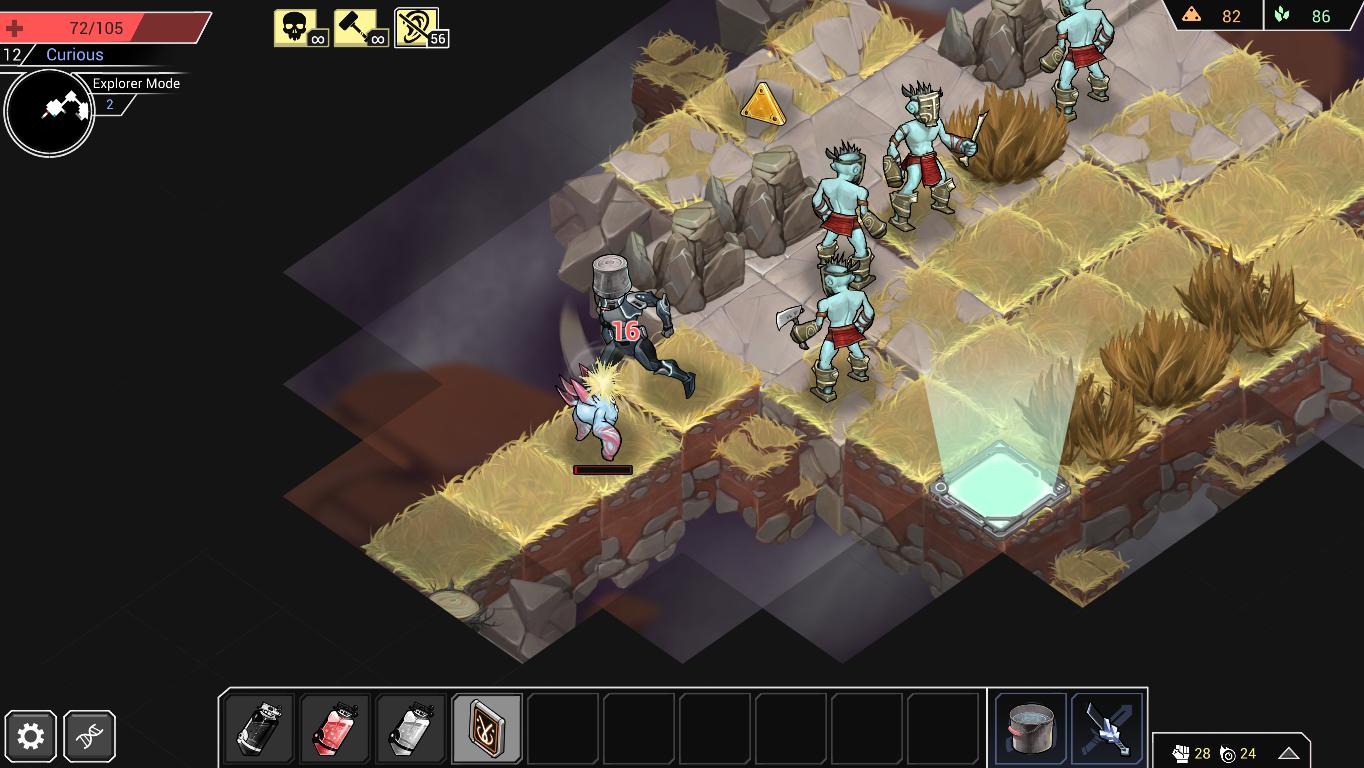 The result was a slightly pared-down version of the later PC release, considered by Kitfox to be a free demo of what was to come. “I think a large number of people who have Steam also have a smartphone of some kind. Maybe some number of them even have tablets. But I think most of them are wary of mobile games. Most of them don’t align with their usual desktop playstyles, and are either A) intended for the elevator or bus, or B) trying to appeal to hundreds of millions of people,” said Short. “So, we figured we wouldn’t be risking too much if we put Shattered Planet as a free demo on mobile platforms—the worst thing that could happen would be nothing, and we’d lose nothing but a couple of weeks. On the other hand, we might just be able to reach a few hundred thousand new fans who wouldn’t have otherwise heard of the game!”

The full benefits of the mobile “demo” remain to be seen, but the fact that Shattered Planet was Greenlit in only eight days indicates that mobile fans may have made an impact. “We were definitely able to get a few hundred enthusiastic players to jump over and vote for us on Greenlight,” Short confirmed, “and we had a pretty good metacritic on iOS. We definitely got to practice our sales pitch, when talking to players and press, what with having ‘practice launches’ on iOS and Android.”

“Practice launch” is a humble way of putting it, considering Shattered Planet on mobile was already a complete game with a surprising amount of depth. Despite that, the PC version expands upon this experience by introducing a number of new features, including some we didn’t even know we wanted until now. The “Daily Challenge” is one such addition, introducing a randomized ten-level world that is the same for all players and requires the use of its assigned (and also random) weapon, armor, and item.

“I’m looking forward to the random combination of items that comes up, and seeing how far I can get,” Short told us. “I’ll probably always try with a level 1 clone, just because I’m a roguelike enthusiast that way, and see if I can get further than my higher-level friends…” Although the challenge can only be completed once per day, it’s a surefire way to earn extra crystals without using your own equipment—if your clone can survive with whatever gear it provides. “The Daily Challenge is completely randomized,” Short said. “Any combination of armor, weapon, and consumable could show up! Sometimes it seems uncanny in its combos, though…maybe it’s developing its own intelligence…” 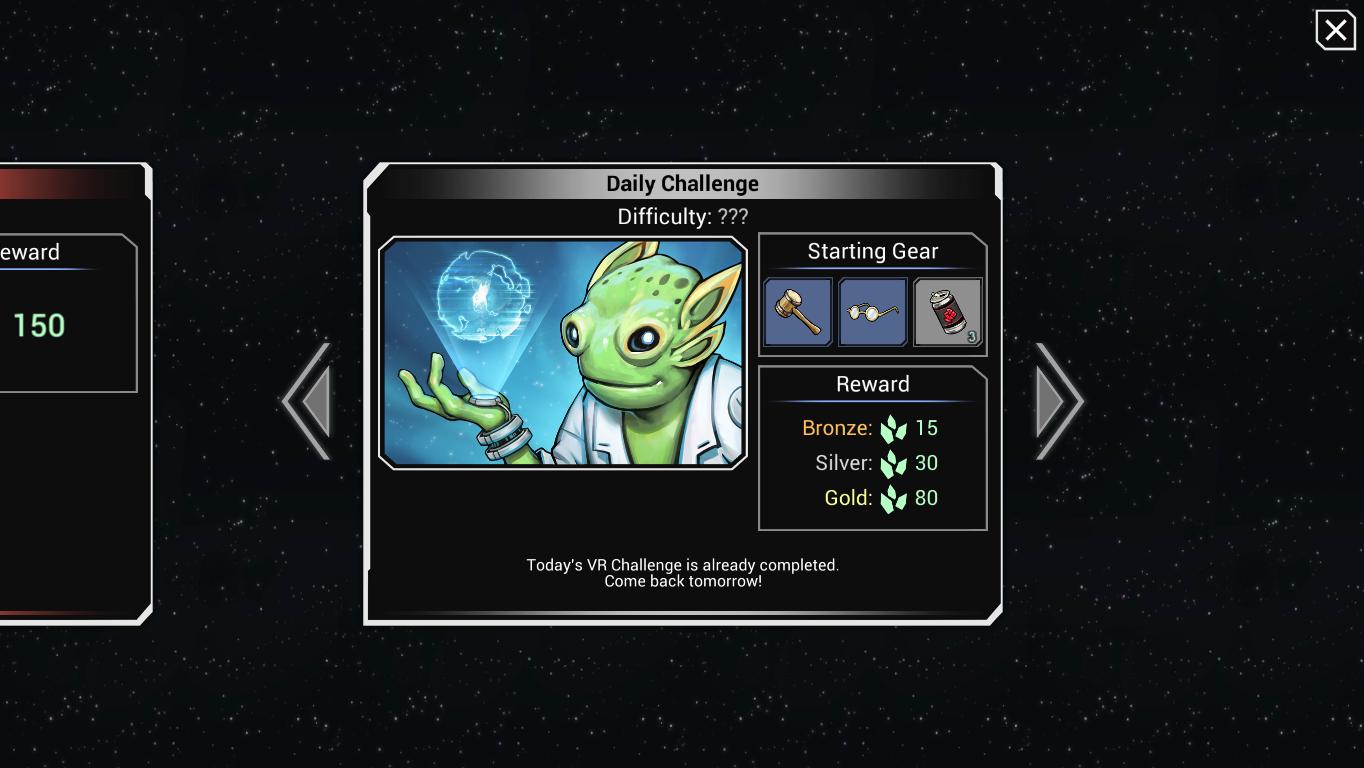 On the less random side, Shattered Planet PC introduces a number of combat enhancements that force players to approach battles more strategically. “The combat changes are probably the most subtle. We felt the combat in the first iteration was a bit too simple—fights were often extremely short and deadly, without a lot of depth to them,” Short said. “To help with this, we made every fight generally take a lot longer—both players and enemies have more health and do less damage, which means that you have more breathing room to use different tactics with items, positioning, etc. We also clarified the stats overall and made it easier to strategize around the damage you deal, your defense, the damage type you’re using, etc. 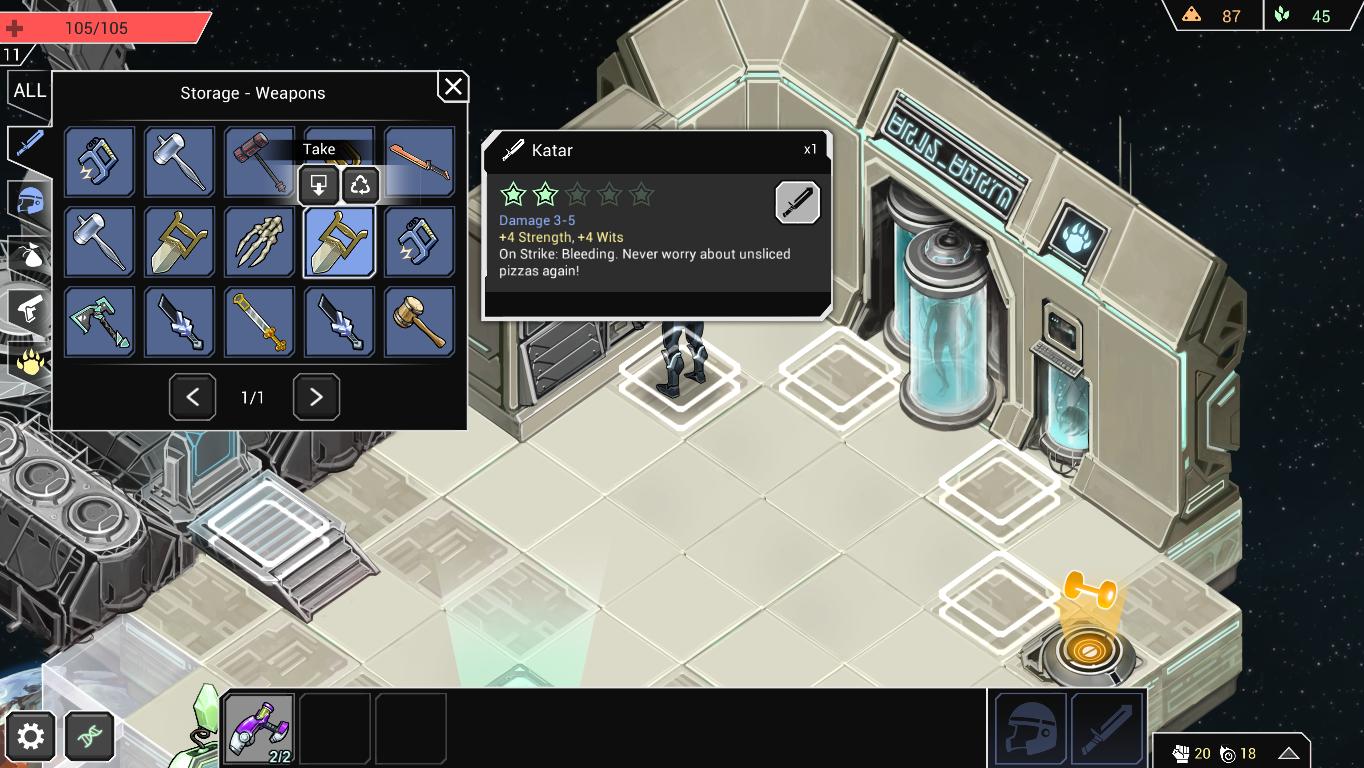 “We did an entire revamp on every single item and enemy with the new statistics system…Everything’s different!” When we pointed out that the PC version felt more difficult than mobile (after many shameful early deaths), Short added, “I think the grinding component is reduced quite a bit, in that the hardest enemy and the easiest enemy are closer in difficulty. What you might be picking up on is that it takes more than one hit to kill the easiest enemies, which is part of the added tactical planning. Use more items and mystery potions!”

This extra planning extends to the characters themselves, which are no longer just aesthetic skin swaps. Each character has a separate leveling tree and their own specialty attribute: playing as the Renegade imparts “Good Mood” for 200 turns, which raises Wits and Fate by ten points each, while playing as the Assassin gives you the “Sneak” ability for 200 turns, making it harder for enemies to detect your clone. The other characters—two of which are $4.99 in-app purchases on mobile, with the third a PC exclusive at launch that will be added to the mobile shop later—are automatically unlocked as you gain research levels and come with their own unique bonuses. 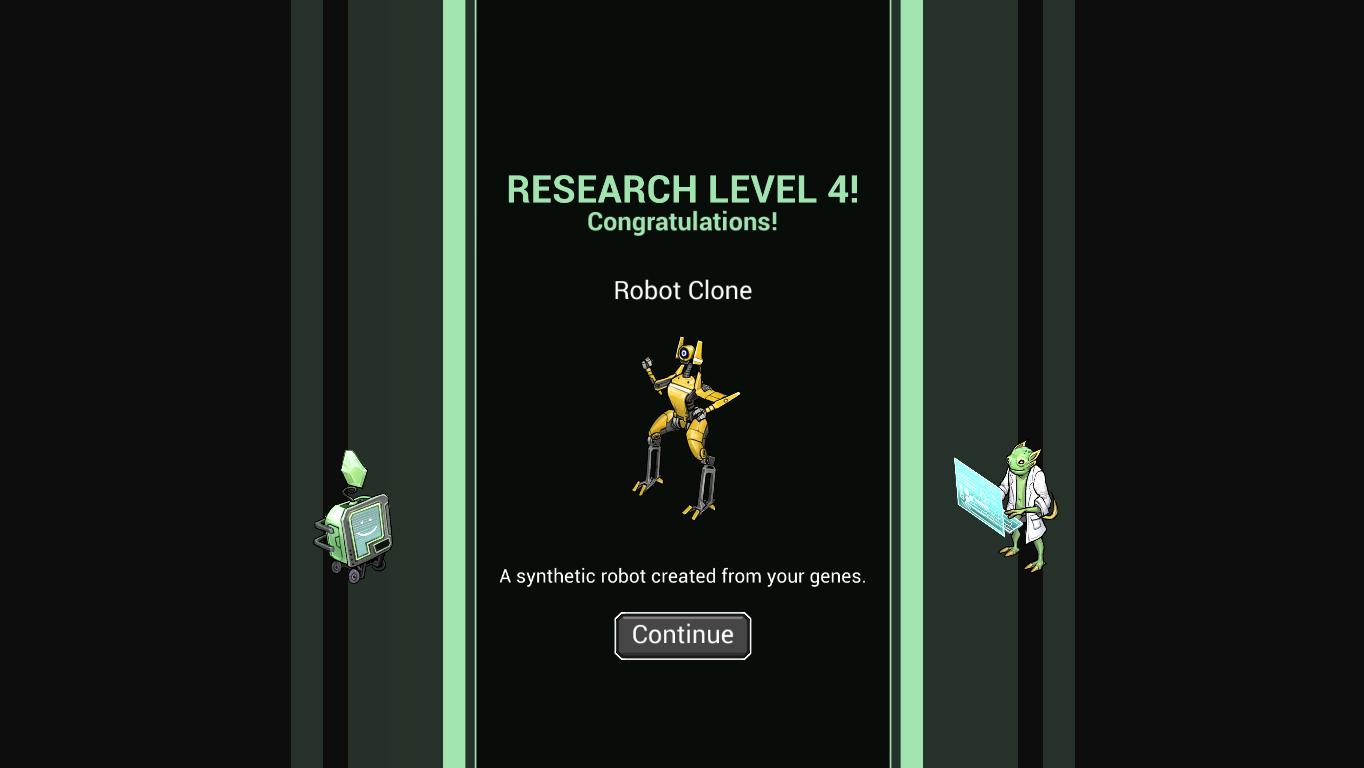 Another significant combat adjustment is the addition of Damage and Defense stats to equipment and items. “It used to be that Strength and Wits were literally the only stats, with Wits functioning partially as dodge and defense,” Short said. “Now, the damage and defense scores are not only more coherent but also more understandable for players!” This means that most weapons will affect both your Damage and base Strength, and armor provides a boost to Defense and Wits/Dodge, allowing for a wider variety of approaches to outfitting your clone for battle. With elemental effects and resistances still coming into play, Shattered Planet on PC definitely embraces its more complex RPG components.

One of our most-wanted features has also been added: the ability to clone pets and take them down to the planet with you. Previously, alien teammates were collected via random events during exploration and they often lived and died in a single run. Now, you’ll be able to extract enemy DNA for future use and create clones on your base ship that will be with you from distance one. Each type of companion has pre-set stats (a Hatchling is stronger than a Crablet) so this isn’t a pet-raising simulation, but it adds yet another level of depth to your pre-deployment planning and on-planet exploration. 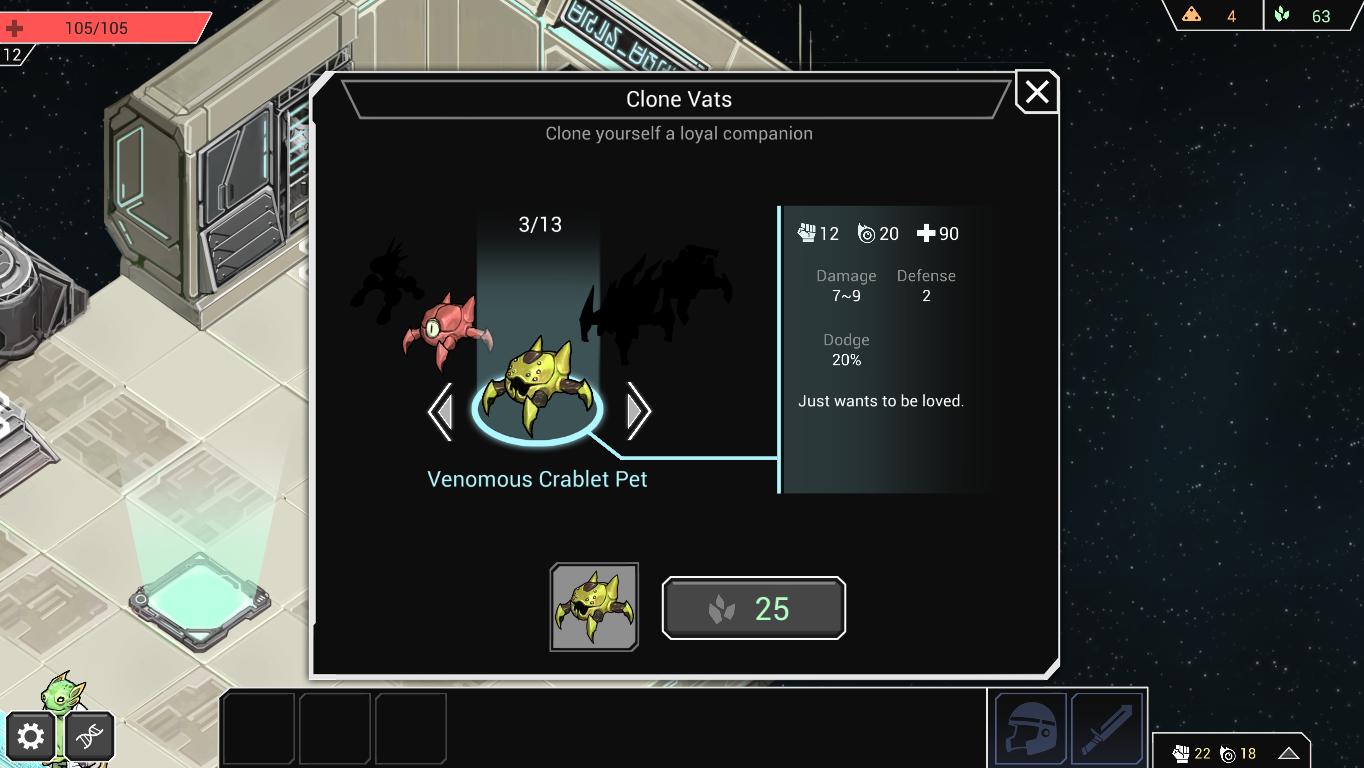 All of these additions combine to create a much deeper experience on PC, which features some naturally platform-specific enhancements as well. Short told us: “We were able to add a bunch of new little assets (a host of new items, icons, etc) that would have pushed us over the download limit on iOS.” This has resulted in 65 brand new datalog features at launch, spanning new weapons, consumables, enemies, environments, and more. “As far as gameplay, you can preview your path by hovering over your destination, which can help with tactical planning. Plus, the inventory is just much more comfortable on the bottom on PC, with hover-over information and context menus that make it easier to use, when you don’t have to tap everywhere to interact with things.”

Although some of the PC changes will be available on mobile in the near future, including a free episode with some new items and the latest character in the shop, most of the other additions will remain PC-exclusive. “The Daily Challenge, class system, and combat revisions are firmly PC-only,” Short told us. With the PC’s much less restrictive size requirements, the possibilities for this platform’s version of Shattered Planet are nearly endless. “We have about a thousand ideas for potential areas of expansion! Eight months ago or so we had a long list of possible powers—haste/slow, shrinking, transforming, item-eating, tile growth, grass growth, and so on and so forth,” Short said. “Infinite possibilities! My keenest loss is not having more Gekkians around, or explaining the human-Gekkian relationship and history of the Galactic Union. We could honestly work on it for years, if there’s players to support it!” 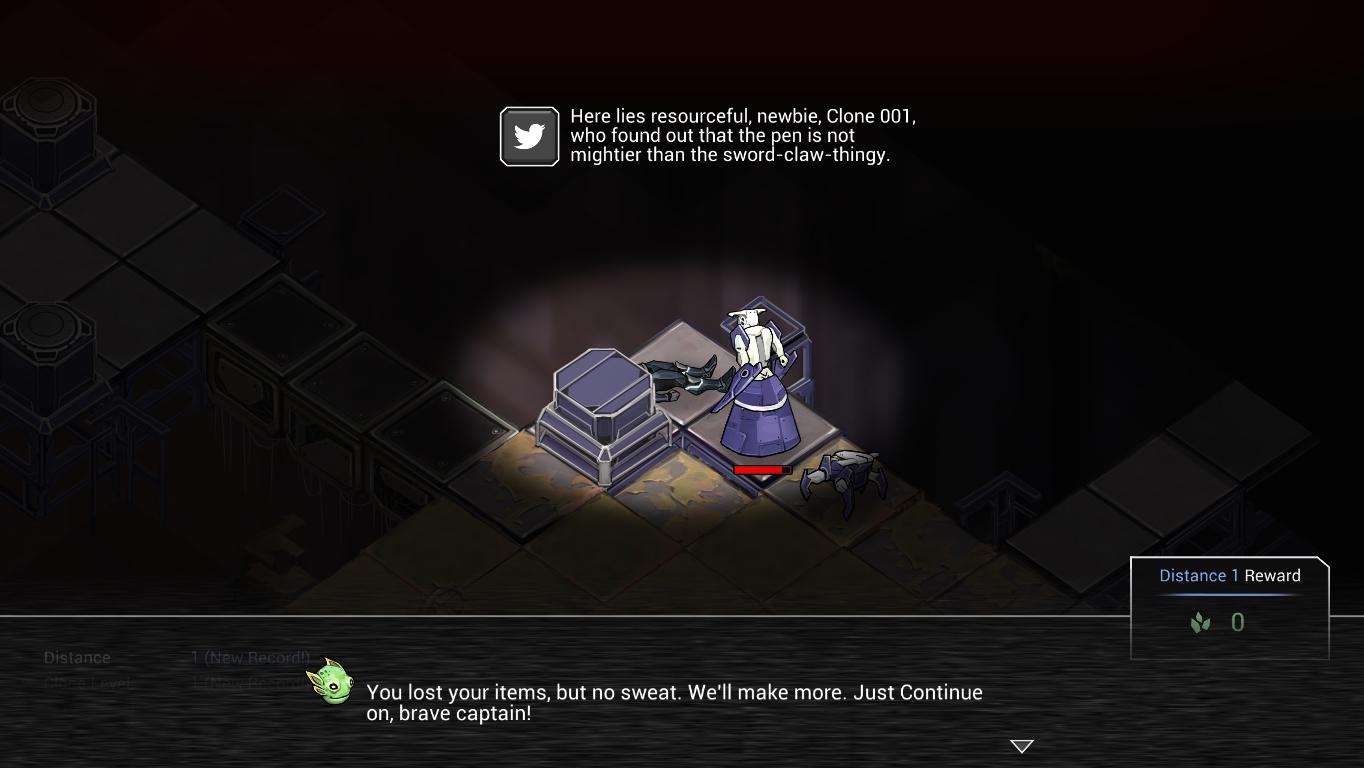 With all the effort and affection the four-person Kitfox team has put into each version of Shattered Planet thus far, we truly hope such updates remain viable for years to come. No matter where you’re playing, it’s the perfect combination of space opera and silliness. “My favorite event is the one where the little worm asks you to surrender and become his vassal,” Short said. “It’s one of the more absurd, unexplained moments of conflict in the game, and I can’t wait to see it pop up in a Let’s Play video, because I’m sure it’s going to get a ‘WTF?’

“I’m inordinately proud when I can manage to make a player both amused and let go of reality a little bit at the same time.” Shattered Planet does exactly that and more, and now it does it all on PC.

Let it Goat Can’t Hold Back Its Popularity Any More