We’re playing Hearthstone’s open beta (and you should too) 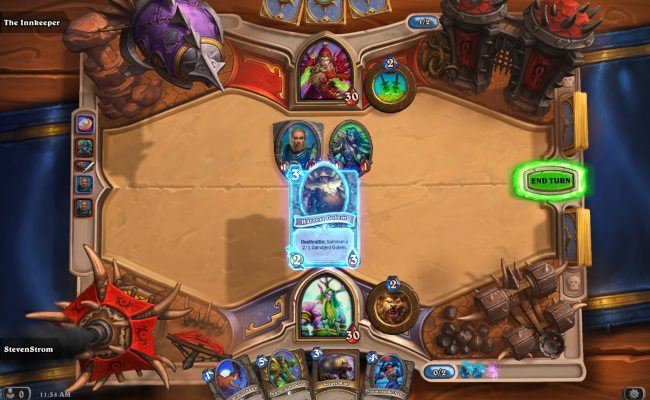 Spells spew fire and sparks; minions swipe at each other with invisible claws; a newly summoned warrior lets out a cry, taunting the enemy to face him and him alone.

In most trading card games these concepts are imagined – a byproduct of card art and flavor text spooling through the players’ minds. Hearthstone, however, has the luxury of being a digital card game with graphics and the like to tickle you fancy and give the old imagination a rest. 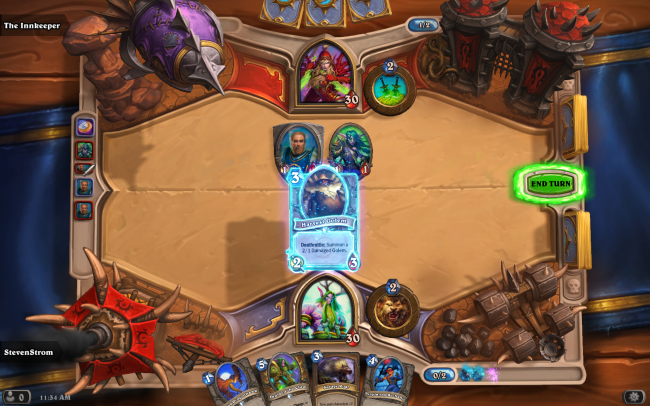 At first I was dazzled, just as I’m sure Blizzard wanted. Then I was worried. Blizzard is a crucible; taking ideas that work in other places and other spaces and boiling them down to their most essential. Card games have certainly been around for an age and a half, but digital card games — ones designed from the ground up for screens and clicks — are relatively new. I wondered; did the company have enough original spirit to make those essentials from whole-cloth?

Apparently not. Or rather, they didn’t bother trying to craft an experience that feels specifically fitted to the digital scene (beyond the flashy graphics) and just did what they always do: Hearthstone is a simple, fast-paced and mechanically airtight distillation of its cardboard cousins. Even the aforementioned presentation does a strangely adorable job of mimicking that look and feel.

The game begins with you opening what looks to be a wooden box. Booster packs are actually represented as wrapped rectangles of mystery (spoiler: there are cards inside). The fresh, sensible ideas are simple and uniquely Blizzard in the way they maintain an (almost) esports-like balance (though it can never be truly so in a game where cards are purchased and equipped beforehand).

The mana used for playing your all-important cards starts at one and grows to ten on an automatic, linear curve for both players. The second player even gets an extra card and one-time-use mana token to close the gap. Each player also has a built-in “hero ability” unique to each of the nine classes. Even if you’ve no cards left to play this turn, there’s always something to spend your mana on in a pinch. 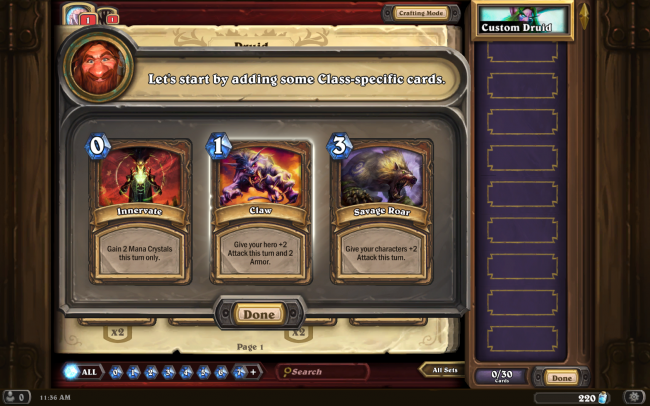 These abilities also enhance the flavor of each class. Entire deck strategies can be built on this one constant, and both current and old-time World of Warcraft players should get a kick out of it.

These are smart, strategic changes to be sure, but Hearthstone is still as much about the same board control and resource management tactics as any game of Magic: The Gathering before it. By its very nature that makes this a competitive experience, and this is where Hearthstone truly excels in its own element.

Blizzard wisely made the choice to limit player communication to a set of pre-canned emotes. Your avatar can let out a hearty “Greetings!” or “My thanks,” but there’s no provision for text or voice chat beyond those on your Battle.net friends list. Even the comparatively aggressive “Threaten” command is some generic reference to Warcraft fiction. Its earnestness is too cute to be taken seriously.With communication abuse out of the question, griefing would logically translate to gameplay. This is a turn-based system, after all. All players would have to do to piss off their neighbor is walk away from the keyboard and make a sandwich until their opposite number got frustrated with waiting and quit. Doing so in Hearthstone, however, shortly activates a “fuse” (represented quite literally on the game board) that turns control over to one player if the other refuses to act. Do it again and the fuse activates even faster. 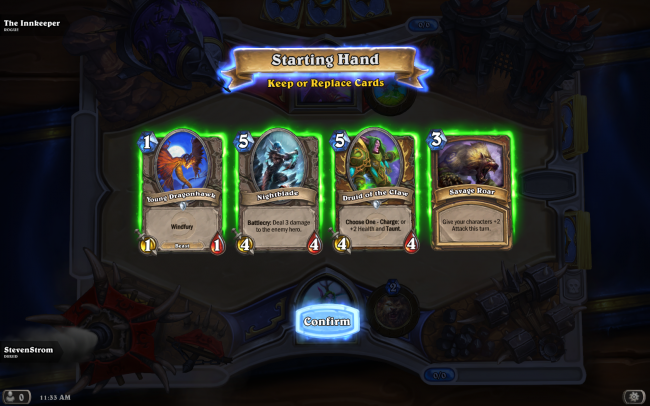 If you insist on finding an excuse for frustration — perhaps over losing because “they just had better cards” — you can always throw yourself to those wolves in The Arena.

Here is where esports comparisons might be made, as entering The Arena puts like-minded players on even footing. You choose one of three random heroes, then, repeatedly, one of three random cards until you have a full set. Without reliance on pre-built decks and purchased cards, everyone has equal chances of creating a decent build within the confines of Blizzard’s algorithms.

Each win in The Arena, up to a maximum of nine, earns you better rewards at the end: booster packs, single cards, gold, and dust for use in card crafting. Lose three games, however, and you’ll be booted prematurely, though you don’t need to win a single game to be guaranteed at least a complimentary prize.

The Arena is really the heart and soul of Hearthstone. Gold for booster packs and, yes, more Arena runs can be earned through winning any online match, and for completing daily quests, but a solid Arena run can earn you back your entry fee and usually more. Once you’ve earned enough gold for your first run, you could theoretically run the Arena for free in perpetuity. The result is that most elusive of creatures: the free-to-play game that can be played on skill alone. 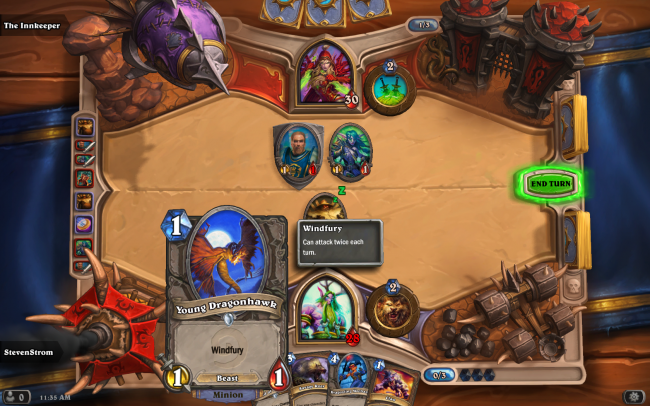 As a beta, there are still changes being made, though I don’t know if “beta” should apply to a game that’s open to the public and accepting their (admittedly well-deserved) money. Even this aspect — the part of the game that highlights the unpolished parts of the game — is incredibly attractive. Patch notes are highly visible and include conversational notes about why each change was made and how it affects Hearthstone on a deeper-than-surface level.

That aside, I would like to see them implement a few balance tweaks. As the first class the game introduces you to, Mages are highly common online and have a simple “fire and forget” strategy. Right now they seem outrageously effective against more complicated, interesting classes like Shamans and Priests (nothing frustrates quite like perfectly arranging a trench of totems and creatures only to have it wiped clean by Flamestrike in a single turn). Paladins and Warriors, by comparison, seem underdeveloped and uninteresting, though perhaps that’s just my personal preference.

In spite of the balancing flaws that will hopefully be ironed out over time, Blizzard has crafted one of my favorite competitive online gaming suites in memory. It’s just wrapped around a game that is merely well-polished, entertaining, and highly addictive instead of groundbreaking.

I think I can forgive that. The fireworks and sparkles help soothe the deep, deep pain.

You can join the open beta youself by visiting us.battle.net/hearthstone/