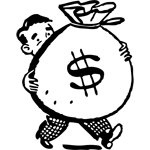 It seems as though people have absolutely no problem buying things that don’t really exist, as a new report from PlaySpan is purporting that the sale of virtual goods reached approximately $2.3 billion in 2011. The numbers seem to indicate that one in four individuals spent money on virtual goods last year, with the average coming out to $64 a year per consumer. In an added bit of news that will shock no one, the bulk of these customers are male, with roughly half of guys ages 13-24 saying they bought virtual do-dads in the past year.

“Consumer acceptance of virtual goods represents a huge growth opportunity, not just for game publishers, but for all digital content companies,” said Karl Mehta, founder of PlaySpan. “We believe we will continue to see a positive growth trend in games and that virtual goods will expand across multiple industries, such as music, movies, social gifting, and rewards, to name just a few. Data we’ve uncovered in our study should help producers and distributors of all digital content fine tune their strategies for reaching audiences across some of today’s most commonly used platforms.”

The top drivers of virtual purchases are video game consoles such as the PlayStation 3 and Xbox 360, where publishers have taken quite a shine to providing post-launch downloadable content for many of their biggest releases. In-app purchases take the second spot, proving that no matter how relentlessly we tease them, people will still buy Smufberries by the wagon.

The industry will no doubt continue to grow as publishers get more comfortable with digital distribution, but the tricky bit will be preventing greed from overwhelming common sense. Users don’t mind to pay extra to enhance or extend an app or game they already love, but when publishers start ripping out core content and nickel-and-diming users? That’s where backlash can begin.