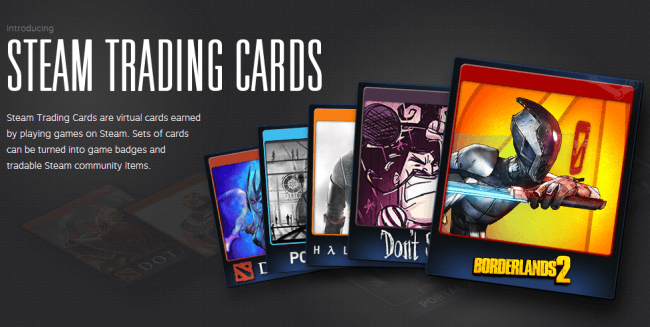 Just when we thought Valve has managed to add every feature imaginable on their popular online gaming service, Steam, they go and surprise us once again by introducing Steam Trading Cards: a new customizable and interactive system that rewards players for the amount of time they spend playing their favorite Steam games.

There are currently 41 games that support the new trading card feature, with more to surely be on the way. Some of these participating games include Don’t Starve, Portal 2, Anodyne, Triple Town, and The Binding of Isaac. There will be a handful of cards attached to each participating game, and completing a set of trading cards will reward you with a special profile badge and other unique profile customization options that are sure to set you apart from other gamers on Steam.

So for instance, The Binding of Isaac features 9 trading cards to collect, with a total of 5 card drops to be earned through regular gameplay. Once all of my drops have been completed, I then have a chance to earn a special randomized booster pack containing 3 additional cards, based on my level of profile experience. If I still need a few more cards to complete my set after all is said and done, I can barter with other Steam users who may want to trade for some of my other cards in return.

For now, the only way to earn these card drops is by logging in more hours of gameplay in each respective title, but Valve will be looking into other rules and regulations for these cards in the future, such as the possibility of intertwining them with Steam’s own achievement system. It should also be noted that free-to-play titles like Team Fortress 2 will make card drops according to your amount of in-app purchases.

For what it’s worth, the cards themselves look really awesome, and it’s a pretty interesting idea to garner further community interaction outside of the actual games themselves. A full rundown of participating games and answers to other specific questions can be found on the official Steam Trading Card FAQ. And while you’re reading that, I’ll be adding on to my 68 hours in The Binding of Isaac to score some awesome new bargaining chips.

CocoaChina on resurrecting a legend with Contra: Evolution on iOS (sponsored feature)